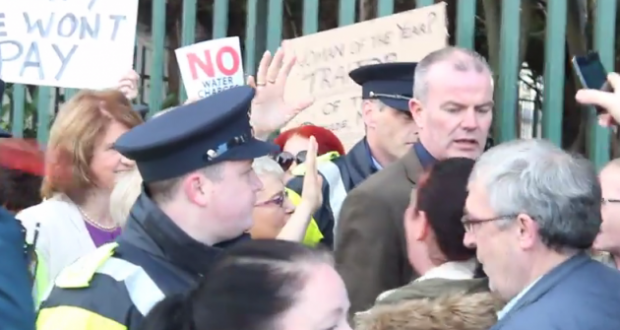 “I have spoken to Glen Carney’s parents who are very upset at having their son splashed on the front page of a newspaper for what was a silly and relatively minor mistake. Glen, who is 19 years old, let the air out of one of the tyres of the car that Joan Burton was in during the protest in Jobstown on 15 November. He incredibly and outrageously faces a potential criminal record, which could follow him for life.

“Do the Gardai and the DPP normally invest time and resources in investigating air being let out of someone’s tyres? The frontpage given to a minor court appearance today by the Evening Herald, part of Independent News & Media, owned by Denis O’Brien, illustrates how this is clearly politically motivated. In particular, it is aimed at discouraging people from attending the Right2Water protest on Wednesday.

“Glen’s arrest and charging is part of an approach of political policing, designed to damage the anti-water charges movement. We are aware of a whole number of people being questioned in relation to the protest against Joan Burton. The idea that 10 people would be arrested was leaked to the media weeks ago. AAA Councillors, AAA activists and many others have been approached for questioning in relation to the protest against Joan Burton. It appears that a line of questioning is aimed at implicating me in a criminal act.

“People should not and will not be deterred. Wednesday will be a massive peaceful show of opposition to water charges, no matter what mud they attempt to throw.”