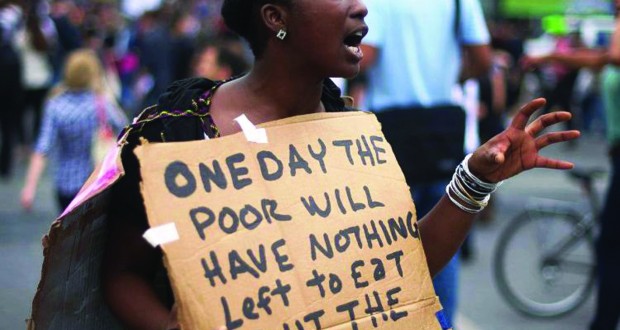 The establishment fear of the anti-water charges protests was summed up by the Dailly Mail in a front page containing a picture of Ruth Coppinger TD and myself with the headline: “‘Democrats’ who believe in mob rule.”

Fear of the mob has long been wheeled out by ruling classes whose rule is threatened around the world. Over 100 years ago, in his pamphlet ‘Labour, Nationality and Relgion’, James Connolly answered similar statements by a certain Father Kane:

“There was a time, stretching for more than a thousand years, when the mob was without power or influence, when the entire power of the governments of the world was concentrated in the hands of the kings, the nobles and the hierarchy. That was the blackest period in human history…. But at last, with the development of manufacturing, came the gathering together of the mob, and …. the mob has transformed and humanised the world….”

He finishes with a rallying cry: “All hail, then, to the mob, the incarnation of progress!”

All changes are won through struggle

All progressive changes in human society have come about precisely because of the mass of people organising for change. Capitalist democracy was established by overthrowing feudalism on the back of the mobilisation of the “mob” in the French Revolution. The right to vote, the right to form trade unions, the formal right to equal pay for men and women, all were won by mass struggles. All were looked at with disdain and fear by the ruling class and their defenders in the media.

The use of the word “mob” by the economic, political and media establishment represents their fear of the mass of working class people not accepting their regular role within capitalist democracy. That role is to vote once every few years, in elections where they are voting fodder for a party that pretends to represent their interests. When promises are broken and their interests are betrayed, they are expected to wait silently until the next elections.

The notion that people would take action between elections to express and enforce their will is an affront to the establishment’s self-styled “defenders of democracy”. Yet that is precisely what is happening, and so effectively. It is the “mob”, the working class and allies who have forced the government to make concessions and can force the government to abolish water charges altogether. This “mob” is increasingly aware of its own power to even bring the government down.

The working class can change society

This is precisely the “mob rule” that democratic socialists believe in – the mass of people becoming organised through community campaigns, a rejuvenated and transformed trade union movement and the building of a mass party for working class people.

More than that, socialists believe in what James Connolly referred to as the mob completing “its upward march to power – a power only to be realised in the Socialist Republic.” That is the notion of the working class and the 99% literally running society in their interests – establishing democratic control over the economy and a state formed in the interests of working class people.

The ability of working class people to re-organise society is shown by the ingenuity and organisation of campaigns against water charges. The regular street and community meetings involving large sections of the community give a glimpse of how society could be organised on a fundamentally different basis – with decisions being made by people affected by them through democratic popular assemblies and delegated councils.