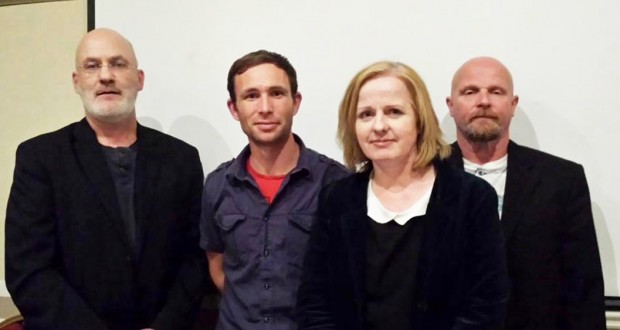 At last night’s South Dublin County Council budget meeting, the Anti-Austerity Alliance (AAA) with the support of People Before Profit Councillors put a motion to the annual budget meeting proposing that the Council refuse to pay €7m of loans for the Voluntary Housing Sector normally funded by the Department of the Environment.

This payment is a central part of the robbery of property tax funding from local Councils by central government. The AAA proposed that instead pressure should be put on the government to pay these loans, as they did in previous years. The €7m should have been earmarked for the building of necessary social housing. This €7m is part of the €19.59m in payments to the Council, which Department officials had agreed with the Council officials to cancel, in order to recoup for the central government nearly all of the property tax. That was on top of the €6.5m already taken out for the equalisation fund by the Department of the Environment.

“This budget consolidates and incorporates the property tax austerity robbery from working class people. To add insult to injury, it adds another robbery on top of that. That is a robbery of the property tax revenue by central government. All of the propaganda around the property tax was about the provision of local services, such as playgrounds, libraries and parks. That is now exposed as a total lie. As a result, the AAA proposed a motion to refuse to accept this robbery, by insisting that the central government would pay loans that it previously did pay. This motion was then amended in order to simply request a letter being sent to the government – a completely inadequate response. We then voted against the budget, opposing the double robbery of the property tax.”

“There was a chance for South Dublin County Council to have a public campaign against the government on the property tax robbery. Unfortunately, the so-called ‘Progressive Alliance’ of Sinn Fein, Labour, Greens and Independents chose not to. When ECB head, Jean-Claude Trichet put a gun to the head of the then Finance Minister, Brian Lenihan and the Irish government in 2010 about the bailout, Sinn Fein would be quick to point out that he should have told the public about this threat and given them a chance to do something about it. I suggested last night that the Department of the Environment has a gun to the Council’s head about the siphoning off the property tax to central funds and we should shout it from the roof tops. We should have decided to withhold any of the money that does not have an immediate consequence and have a public campaign over the fact that the net benefit to SDCC of the €32.65m collected in Property Tax in the County is a meagre €2.5m or 7.7% of the total.”

“The lack of fight by Sinn Fein and others on the Council against this property tax robbery was striking. If the nine Sinn Fein Councillors had combined with the three AAA and three PBP plus left independents we could have had a majority to stand up to the government on the property tax robbery. This would have clearly exposed the reality of the property tax, which is simply a continuation of the austerity agenda, and has nothing to do with local services. Unfortunately, this opportunity has been missed.”