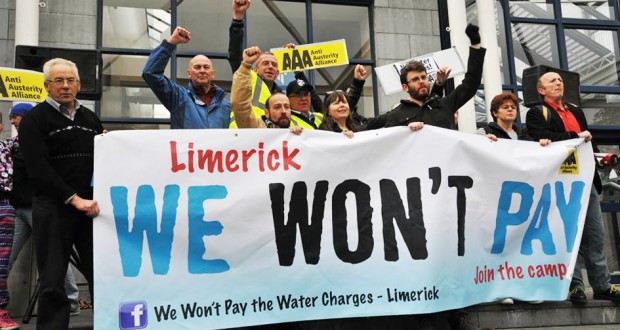 AAA – building a movement for the 99%

What party represents the hundreds of thousands of people who took to the streets on 11 October and 1 November (and the many others not on those marches who applaud them)? It’s obvious there is a gaping political vacuum, with no major party or movement basing itself on fighting the cause of workers, the unemployed, pensioners and young people.

That’s why the emergence last year of the Anti-Austerity Alliance (AAA) was an important step along the road to building a new mass party for working class people. The AAA was set up by people who fought in the campaigns against the household and property taxes. New activists, not members of any party, backed a proposal made by the Socialist Party for the campaign to move into the political arena and take on the austerity parties.

The AAA scored major successes in the May elections, winning 14 council seats, having its endorsed candidate win the Dublin West by election that same day and – obviously – the fantastic victory in electing its first TD who stood under the AAA banner, Paul Murphy, in the Dublin South West by-election.

The Anti-Austerity Alliance was formed initially around a ten-point programme opposing austerity taxes and cuts, refusal to pay the odious bank debt, defence of our public services and for public ownership of the banks and our natu­ral resources. The programme also argues against racism, sexism and discrimination in all forms. AAA councillors pledge not to engage in junkets and pacts with parties promoting austerity.

Fighting for affordable homes for all

The AAA has also moved to take up other key issues, notably the housing crisis, where the AAA organised public meetings and assisted in the setting up of local housing action groups with those affected by the crisis and facing homelessness. An AAA housing document is pending, which exposes the roots of the housing emergency and explains what’s needed to end it.

It also produced a Budget statement, outlining examples of where wealth exists in society, which could be used to resolve the problems facing workers, the unemployed, emigrants and all those oppressed by capitalist austerity. Only by taking public ownership and democratic control of this wealth and using it to invest in job creation and services can austerity end.

Water charges is now undoubtedly the main struggle facing us in the next year. We have initiated the We Won’t Pay campaign, as there is a need to feature non-payment of the water bills as the bedrock tactic in the battle to beat the water tax. The AAA also prioritises fighting meter installation through community mobilisation and organised the very first protests against water metering in Littlepace, West Dublin, in October last year.

It was the issue of water charges which exposed Sinn Fein in the Dublin South West by election as a party gearing itself up for coalition government, just like Labour, and unwilling to back the national revolt against the charges. While voicing opposition to austerity, Sinn Féin is not a Left party calling for a different system to that of capitalism and the cultural mores of the establishment.

The ability of the AAA to take on all the establishment parties and Sinn Fein should provoke anyone who wants to see real change to consider joining. We need a new movement of ordinary, working class people in this country, which will challenge the rule by the 1%, the dominance of the rich and corporate elite over the lives of the majority. If we don’t organise and struggle against this rule, we will continue to have our living standards and our vital services butchered for their continued enrichment.

If you want to fight water charges, for a roof over your head and for decent healthcare and education for your children, join the Anti Austerity Alliance and help build that new movement we so desperately need.