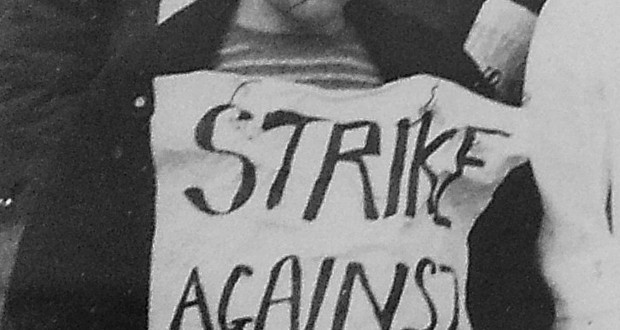 Benjamin (Benny) Adams died after a long illness on October 6th 2014 at the early age of 65. Benny was active in the Militant, the forerunner of Socialist Party in Ireland, from the mid-1970s to the mid-1990s. For most of that time he worked full-time as a political organiser.

Benny came from a large family-he had seven brothers and sisters-and lived in his early years at the British Army Barracks in Ballymena County Antrim as his father (also Benjamin) was a career soldier.

In early 1976 Benny and several comrades, including his brother Ronnie, came into contact with Militant. All were from a Protestant background and they had formed their own socialist group in Ballymena. In part they contacted Militant for assistance in their opposition to the rise of Ian Paisley and his reactionary ideas. Paisley’s initial base was built in the North Antrim area around Ballymena. His first following was largely rural, conservative and religiously fundamentalist.  Ballymena was a market town which by the 1970’s had a large working class concentrated in several large factories, such as Gallagher’s cigarette factory which then employed over 2000.

At the time Ballymena was scarred by the same sectarian violence as the rest of the North. In June 1976, gunmen opened fire inside a Protestant-owned pub in nearby Templepatrick killing three Protestant civilians. The attack was claimed by the “Republican Action Force”, a cover-name used by the IRA. A reprisal attack on The Ramble Inn, on the main Antrim to Ballymena dual carriageway, killed six. The pub was owned by Catholics but most of its customers were Protestants from the surrounding area.

On one particularly black day in October 1976 a young Protestant woman Yvonne Dunlop was killed when an IRA firebomb exploded in her face when she looked into a bag left in the shop where she worked. Among those jailed for the attack was Thomas McElwee, who was to die on hunger-strike at the age of 23 five years later. Sixteen bombs exploded that day in Ballymena and later that night a 40 year old Catholic man, Sean McCrystal, was burned to death in the street by the UVF. This was the context in which a small group of comrades began to work.

In April 1977 the United Unionists Action Council (led by Paisley and Ernest Baird) called a “strike” to demand an increase in repression against the IRA, which was generally ignored, even by workers in towns such as Ballymena. Paramilitaries tried to keep workers at home through intimidation-at the beginning of the second week, a no-warning bomb exploded outside Gallagher’s factory in Ballymena. The stoppage ended in failure with Paisley arrested in the c entre of Ballymena surrounded by the many hundreds of farmers who had come with their tractors to blockade the streets.

Days after the strike, local government elections were held and Paisley and his allies took control of Ballymena District Council.   The result of the election paints a one-sided picture of Ballymena at the time. The class struggle was alive and well in Ballymena despite the rise of Paisley and the violence of the paramilitaries, with regular strikes in local workplaces and struggles by tenants associations for improved housing conditions.
The turnout in the elections was low, in part because by then the Northern Ireland Labour Party (NILP) had collapsed as even a possible alternative to the sectarian parties.

The DUP moved to impose fundamentalist ideas on everyone else, by, for example, closing the swimming pool and chaining up the park swings on Sundays. Benny and his comrades lead the opposition in this largely Protestant town, protesting against the Sunday closure policy and challenging the DUP in two council by-elections in 1977 and 1978, when Eric Johnston stood as a Labour and Trade Union Co-Ordinating Group (LTUG) candidate (gaining a credible 6% of the vote on the first occasion). The only contribution of the rump NILP was to issue a statement condemning the LTUG and seeking to expose its links to Trotskyism.

Youth work was the key to the rapid growth of Militant in the early 1980s.  A “Youth for Socialism” campaign was launched in 1979 and Young Socialist (YS) branches were established in Belfast, Derry, Strabane and Ballymena. I first met Benny on a snowy day in January 1980 and was immediately aware of his ability to reach out to young people who were questioning the system, though he was by then 30 years of age and I and my friends were only 15.

10-15 young people attended YS meetings each Saturday afternoon in the sprawling Ballykeel estate, after earlier activity in the town centre, often suffering harassment by the Ulster Defence Regiment (UDR) who flexed their muscles by putting teenagers up against the wall in front of Saturday shoppers. Ballymena YS had more than 30 members from the town and the surrounding areas and developed its own anti-Thatcher street theatre which toured the North as the YS attempted to put down roots in other towns.

Benny was secretary of the LTUG in Ballymena and became a full-time worker for Militant. In the first half of the 1980s he organised branches in Ballymena and Ballymoney. In the mid-1980s Benny moved to Belfast to work on the Militant newspaper. He was a skilled worker when it came to the lay-out and graphic tasks that were required in those pre-computer days. Indeed Benny was a man of many talents-a gifted guitar player, a painter and a chess-player. He was a popular and reliable comrade for many years, the compere at many quizzes and talent nights.

Unfortunately Benny was troubled by severe illness from his early 50’s, which robbed him of his intellect, his memory, and eventually even the power of speech. Benny’s brother and comrade Ronnie is also now dead-he passed away in London two years ago.  Ronnie was politically active for several years before leaving for London in the early 1980s.

Their legacy remains. In Benny’s own words after the 1978 by-election, in which a small group of young comrades were brave enough to challenge the bigotry of Ian Paisley: we will continue to “advocate socialist policies and raise socialist demands in all areas of Northern Ireland”.