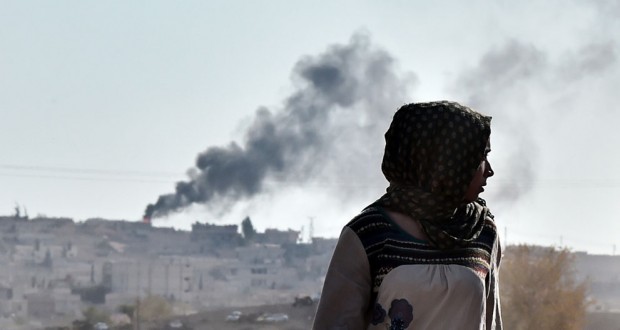 Obama and his western allies, such as Cameron in Britain, argued that a policy of air strikes alone would be sufficient to defeat the advances made by ’Islamic state’ forces in Iraq and Syria. Now with the possible defeat of Kurdish forces fighting IS for control of Kobane city, this policy lies in tatters. IS forces have advanced into the city and, at the time of writing, seem to be on the verge of scoring another victory. Amidst reports of horrific scenes of brutal slaughter in the city by the crazed forces of the reactionary IS, US air strikes on IS forces have had little effect and failed to halt the advance. The Kurdish population in Kobani have waged a courageous and desperate fight to defeat IS or to face almost certain slaughter.

At the same time, the President Obama and Prime Minister David Cameron’s policy of air strikes is not only failing in Syria and Kobani. Developments in Iraq, especially in the western province of Anbar, have seen major gains by IS forces. Anbar province, which accounts for nearly 25% of Iraq’s territory, all of the major towns and cities, with the exception of Haditha and two military bases near Hit and Fallujah, have fallen to IS. Once again, the Iraqi army was left in disarray and offered little effective resistance. In yet another addition to seemingly endless humanitarian catastrophes, an estimated 750,000 people have already fled the province.

It is now possible that IS forces may move on to launch a further offensive with the objective of taking the Sunni western part of Baghdad. Anbar province was at the centre of the Sunni uprising against the US occupation in 2003. The key to current victories of the IS forces lies not only in the large amounts of heavy weaponry and arms they managed to capture from the disintegrating Iraqi army. The rapid advances IS made over vast areas of Iraq and Syria is also due to the fact that the IS uprising has become a generalised Sunni uprising.

The brutal response by Shia militias, who have made some advances north and north east of Baghdad, has not distinguished between IS fighters and ordinary Sunni people. This has helped to drive more of the Sunni population under the umbrella of the IS, as many do not see any other force to ‘defend’ them. Shia militias in Baghdad speak openly of driving out the Sunnis from mixed areas of the city, such as Diyala. The IS forces have been able to base themselves on the oppression dealt out against the Sunni population under the western-installed Iraqi government of Maliki following the US-led occupation in 2003.

The crisis is likely to intensify following these developments in Iraq and the possible fall of Kobani to IS forces. The Turkish regime of Prime Minister Erdogan has consciously held back from intervention against IS forces advancing on Kobani, fearful of the effects of a victory by the Kurdish forces in Kobani on the 15 million-strong Kurdish population inside Turkey itself. Most of the fighting in Kobani is being led by the People’s Protection Units (YPG) – the Syrian branch of the Kurdistan Workers’ Party (PKK) in Turkey. The Erdogan regime would be more comfortable with an IS victory over the PYD rather than vice versa, as indicated by the recent agreement reached that led to the release of Turkish hostages held by IS.

No trust in regional leaders or imperialism

There can be no trust in any of the regional leaders or western imperialism to resolve this crisis in the interests of all the peoples of the region. Western imperialist intervention is only serving to worsen the catastrophe. Much of the origins of the current slaughter can be found in the legacy of western imperialist interventions into the entire region. No trust can be placed in the Sunni or Shia elite and rulers of the countries of the region, which are being drawn into the conflict and seeking to use it to gain for themselves. Turkey is looking to strengthen its expansion into Syria and seeking to establish new mini form of the Ottoman Empire.

Obama has spoken of assembling a coalition of Sunni powers, such as Saudi Arabia, Qatar, and the United Arab Emirates to oppose IS. However, while the corrupt oppressive ruling dynasties of these countries may not be fully in support of IS’s actions, and some of these regimes have been actively involved in backing IS, they all have their own regional interests and a different agenda to Obama. Defeating IS is not the main priority for them. Also, in the short term, they can defend their own interests by the fact that IS can cause more problems for regional Shia regimes.

To combat the horrors of IS and all other reactionary sectarian forces in the region, it is necessary to build a united movement of Sunni and Shia Arab masses together with the Kurdish, Turkish and all other peoples. To combat the reactionary threat of an IS slaughter in Kobani and elsewhere in Syria and Iraq, democratic committees need to be built to form mass militias. A struggle to lift the arms embargo in Turkey, to allow for an arming of such militias, is necessary.

In Turkey, committees of Turkish and Kurdish workers need to be formed and to come together in a united way. The building of non-sectarian committees of the Sunni and Shia masses in Iraq, together with the Kurdish people in Iraq, in opposition to sectarian forces, on all sides, is the way forward. Such committees could form the basis of a government of the workers, peasants and all those exploited by capitalism and imperialism. A voluntary and equal socialist federation of states would guarantee the democratic, national and ethnic rights of all peoples of the region. 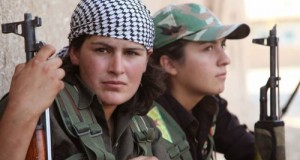 Kurdistan: Battle for Kobanê at a crossroads