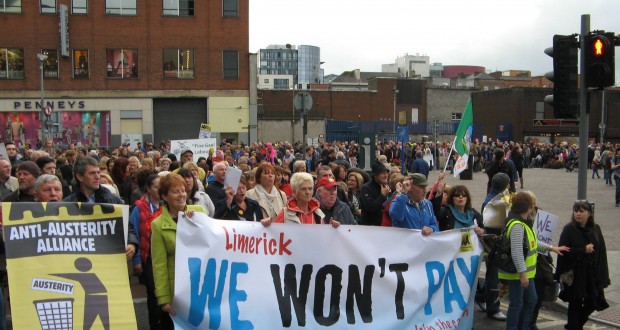 A massive protest of 10,000 marched through Limerick city on October 25th against water charges. The demonstration was wholly organised by the We Won’t Pay Campaign.
The dominant theme was unquestionably support for a campaign of mass non-payment with chants of “No way, we won’t pay!” echoing throughout the streets of Limerick for hours as the march passed.

Not only that, but the need for the demonstration to be merely start of an organised campaign of boycott was raised by We Won’t Pay and eagerly responded to by demonstrators with over 100 signing up to organise We Won’t Pay groups in their own areas.

The pressure exerted by the massive water charges revolt was exhibited locally in the days leading up to the protest by panicked politicians desperately trying to clamber on the bandwagon. Even the Fianna Fáil County Cathaoirleach said he supported non-payment!

However, people were rightly suspicious of politicians dressing up as critics of austerity and the promises made from the sidelines. It was readily understood that without mass non-payment, that the pressure to abolish will dwindle.

The protest concluded with a mass burning of Irish Water ‘application packs’ in a big Halloween cauldron. It was met by huge cheers and enthusiastic chanting that must have sent shivers down the spines of the austerity politicians in attendance. The revolt against water charges is spreading and gaining momentum. 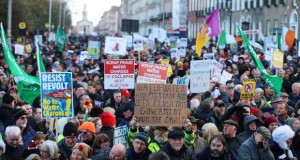 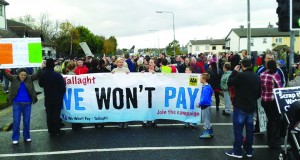