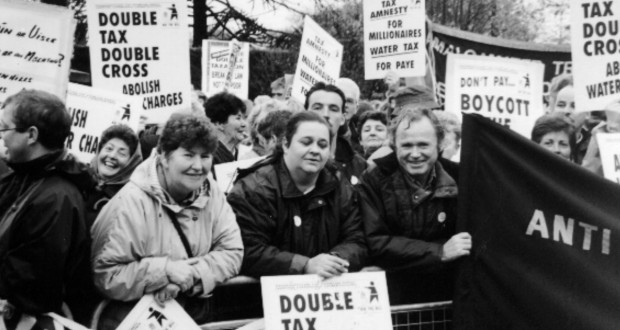 In December 1996, the now Labour Party Minister for Public Expenditure, Brendan Howlin – at that time Minister for the Environment in a Fine Gael/Labour Coalition government – announced the national abolition of Water Charges. This was a huge victory for the power of ordinary working class people, who had actively supported a massive three year campaign of boycott, protests and political pressure concentrated in the huge residential suburbs of Dublin.

In 1983 the then Labour Party Leader and Minister for the Environment, Dick Spring – also in a FG/Labour government – brought in legislation giving local councils the power to charge households for water, sewage and domestic refuse collection. These local charges were instantly controversial, ­­labelled as “double taxation” which would hit PAYE workers the hardest. This was a time of massive tax evasion by the rich.

Campaigns of opposition and protest were launched in many parts of the country and there was a spontaneous refusal to pay. Such was the pressure that, after the Local Elections in 1985, Fianna Fáil, which was then in opposition but had won a majority on Dublin City and County Councils, did not provide for water charges in these Councils’ budgets. However they became established in every other area of the country.

In January 1994 Dublin County Council was broken into four separate local authorities: Fingal, Dublin City, South Dublin and Dun Laoghaire. The Fianna Fail/Labour Coalition of the day, with the management of these County Councils, saw this as an opportunity to bring back Water Charges. Dublin City Council held off to see if charges could be successfully reimposed in the suburbs.

The Federation of Dublin Anti-Water Charges Campaigns was immediately launched with major public meetings, mass boycott of the charges, mobilisations, protests and pickets – all to exert political pressure on the Councils and the Government .

Tens of thousands of households refused to pay the charge. Hundreds came to public meetings and very many became actively involved in the campaign, distributing hundreds of thousands of leaflets, protesting and keeping their neighbours informed of developments.

Toward the end of 1994, South Dublin County Councils attempts to disconnect non paying households were met by protests and disconnected householders were quickly reconnected to their water supply by local campaigns. The government collapsed on unrelated issues and without an election, Labour formed a new government with Fine Gael and Democratic Left. Under pressure, the new government brought in a legal “compromise” that the councils would have to go to the District Courts to get permission from a judge to disconnect water.

Massive protests were held at the first court cases. The Campaign also put in leading barristers to defend householders and to find any loopholes in the new law which they successfully did to great effect, frustrating the Councils.

The Councils then began to bring hundreds of householders to court for simple contract debts. Again the campaign clogged up the courts with defended cases.

In April 1996, a By-Election was held in Dublin West to fill the seat left vacant by the death of a leading Fianna Fail politician, Brian Lenihan. I was then a Councillor in that area and was put forward a Militant Labour candidate and endorsed by the Dublin Anti Water Charges Campaign. The Fianna Fáil candidate was Brian Lenihan, Junior. With the abolition of the water charges as the sharp edge of our election campaign and with the entire political and media establishments backing Lenihan, the result was a huge shock as we almost won – the final vote being 11,754 votes for Lenihan with us 370 votes behind on 11,384

This By-Election gave political expression to the massive boycott campaign and terrified the government parties, who feared anti-Water Charges candidates taking seats all over Dublin and beyond in the looming General Election. Thus the decision to abolish.

To defeat the new water tax it is absolutely possible to repeat the campaign of the Nineties with new variations. A By-Election in Dublin South West in October makes for a remarkable coincidence and a victory there for Paul Murphy, the Anti Water Charges candidate put forward by the Anti Austerity Alliance would put huge pressure on the government and also on the opposition parties, Fianna Fáil and Sinn Féin to commit to abolition of the charges if in government.