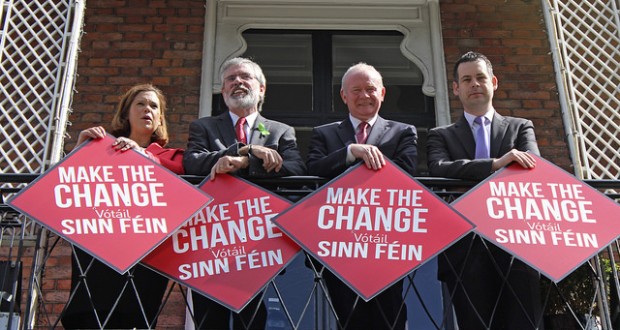 The Local and European Elections last May revealed a massive rejection of austerity by working class people and a huge desire for a political alternative. In this context Sinn Féin have made huge gains and were clearly seen by many as a left and anti-austerity force.

Sinn Féin use their platform in the Dáil to attack the government for its austerity policies and have built up support on the basis of their opposition to austerity, the bailout and property / water taxes.

Given their 14 TDs and 154 councillors, it would be of huge benefit if Sinn Féin were to use their position to build the kind of active movement against austerity which is needed; for example by supporting a non-payment campaign to defeat the Water Tax. Unfortunately, that is not the approach they have taken.

Sinn Féin have indicated they want to be part of a coalition after the next election, possibly involving Labour, and not ruling out Fianna Fail or Fine Gael. We need to start asking questions about the price they will pay to achieve this. In an interview on Morning Ireland (11 September 2014) Sinn Féin TD Pearse Doherty essentially said that abolition of Water Charges would not be a red line issue for Sinn Féin in entering a coalition government.

Sinn Féin’s attitude to political alliances in councils should also be a concern. In councils around the country since May, Sinn Féin have engaged in carve ups of Mayoral and other positions with Fianna Fáil, Fine Gael and Labour, even where there have been majorities for austerity critical parties. For example, in Cork Sinn Féin rejected the AAA’s proposal for an alliance of Sinn Féin, AAA and left and independent councilors to create an anti-austerity council. Instead, they voted for Fianna Fáil nominees for Mayor and Deputy Mayor.

In government in the North, Sinn Féin have implemented cuts and privatisation. Again and again, we see that unfortunately the verbal opposition of Sinn Féin to austerity policies does not match up to their actions in practice. Many people in the last General Election voted Labour in the hope that they would defend the interests of working people. Labour’s betrayal of these voters led to their decimation in May. This should be a warning to the many who now look to Sinn Féin as an alternative.

Like the other main parties, Sinn Féin actively seek support and finance from big business, particularly in the US. Friends of Sinn Féin, their US fundraising arm, raised $359,023 in the six months to April 2014 including $20,000 from a construction company called United Structural Works, $10,000 Eurotech Construction Corp and $5,000 from Safeway Atlantic who employ Anglo’s David Drumm as a consultant!

A left and working class alternative is certainly needed. Unfortunately, when their record is examined closely, this is not what Sinn Féin offer.