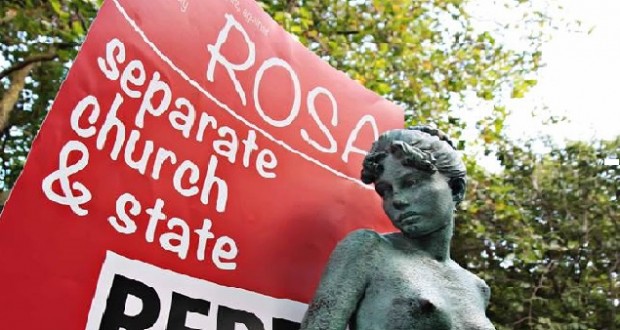 Statement from ROSA to Coalition to Repeal the 8th Conference. ROSA is an anti-capitalist, pro-choice women’s rights group, that Socialist Party women members initiated and continue to play a very active role in.

The sickening treatment of a young, migrant, highly vulnerable rape victim (Ms Y) by this state has to be a spur to re-develop and to spread an active pro-choice movement.

We have to seize this moment and through protests, mass occupations, and huge political pressure on the Labour Party in particular. Labour is facing electoral annihilation in a general election and is attempting to regain support with Burton as leader – they are susceptible to major pressure from below.

We are demanding an immediate referendum to repeal the 8th Amendment. Referenda are already planned for Spring 2015 – this must be the absolute latest date for a referendum to remove Ireland’s abortion ban from the Constitution.

The Catholic right reactionaries who engineered the 8th Amendment to the Constitution never intended the X Case interpretation (that abortion be allowed when a woman’s life is in danger, including by suicide). This happened as there was such a massive wave of protests and outrage at the state’s incarceration of a 14 year old rape victim, which spurred on the X Case judgement. The lesson for today is – pressure and protest from below is the harbinger of progress. The pro-choice movement must focus all its energies intensely on working for this with “Repeal the 8th – Name a date” for a referendum as the central slogan we all push for in a united way. This should be the key slogan of the March for Choice on the 27 September, which must be pushed with extra urgency by all activists across the state to mobilise a bigger force while the pressure is on for repeal.

Timing is crucial. In ROSA, we feel a tactical mistake was made by the pro-choice movement after the tragic death of Savita, as the protests were increasingly framed to focus on X Case legislation. This narrowed the debate. It also was a de-mobilising factor as it was broadly felt that the government was going to legislate for X, detracting from the urgency and necessity of continuing and building the active protest movement. A narrow focus on X facilitated the government to do the least they could get away with – pass legislation for X in a move that was so minimal that it marginally worsened the situation for women. In our first publication in February 2013, ROSA wrote: “We believe that the pro-choice movement should not tactically focus on X Case legislation first, then repeal at some stage in the distant future. The two could be done simultaneously and are the minimum needed to defend women’s health. They are also widely supported in Irish society, so why ask for less?”.
Today, we similarly must ensure that the debate is not narrowed. The fight for repeal is intertwined with the fight for a woman’s right to make decisions about her own body. We have to end the discrimination faced by poor women, migrant women, sick women, women in abusive relationships whose ability to travel is restricted – abortion must be free, safe and legal – it’s a woman’s right to choose.­