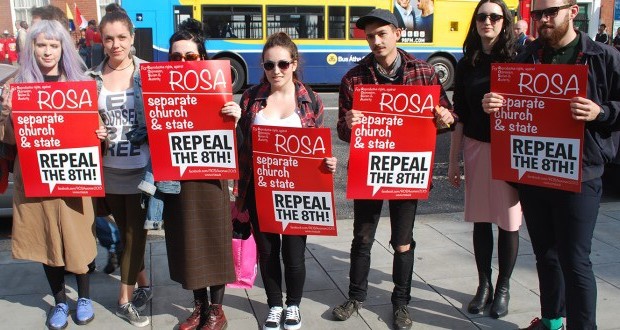 “According to the Sunday Times, a young woman, reportedly a rape victim, requested an abortion when approximately 8 weeks pregnant, on grounds of her suicidality. The Sunday Times reports that by the time the expert panel deemed her suicidal, the obstetrician intervened to suggest a C-section, or induction, as the foetus was reaching viability. The Sunday Times also details the woman going on hunger and thirst strike because of the denial of her request, a forced hydration order from the state, the woman refusing a suggested C-section, a subsequent request for a court order to enforce a C-section that was then rendered unnecessary as the woman agreed to a C-section after which time a baby was delivered.

Without being in possession of the full facts, it seems that the state put a vulnerable woman through unimaginably cruel mental and physical suffering. The fact that this young suicidal woman who it seems was unable to travel due to her migrant status, went on hunger and thirst strike indicates that she was caused extreme distress through delay and an eventual denial of her request. The forced hydration court order combined with a continued denial of the woman’s request for an abortion seems barbaric. The fact that her foetus was represented by a lawyer in court isMedieval and illustrates that the equation of a woman’s life with that of a foetus in the 8th Amendment to the Constitution continues to degrade and discriminate – in this case it meant that a suicidal woman was abused abominably by the state.

By the time the panel agreed that the woman was suicidal, the obstetrician insisted that the foetus was viable. The inevitable contradiction of the ‘balancing’ of rights in Catholic Church-influenced Irish law – of a foetus, and of grown female human beings means that women’s rights continue to be denied.

After the tragic death of Savita Halpannavaar, the mass of ordinary people in Ireland proclaimed, ‘Never Again’. Unfortunately, until we repeal the 8th, women’s bodies will continue to be viewed as ‘vessels’ and as a site for wranglings by the courts and politicians.

Questions that I am posing directly to the Government and Ministers Varadkar and Fitzgerald:

– What caused the delay between a suicidal woman requesting an abortion when she was 8 weeks pregnant, and the denial of this request 12 or more weeks later? Was it as a result of the new cumbersome and unworkable legal framework and guidelines that clearly failed this woman, or was there a ‘balancing of rights’ to deliberately delay until viability?

– What were the circumstances that empowered the state and the HSE to take full control over this woman, including the decision to go to the courts at taxpayers’ expense? Why wasn’t she afforded the right to have an abortion or, if not, to leave the jurisdiction and have one abroad? Why was there a forced hydration order granted when a woman, suicidal as a result of her pregnancy went on a hunger and thirst strike, precisely because she was being denied the abortion she required in order to end her suicidal thoughts? Was the forced hydration issued in the interests of the woman, or the foetus?

– The right for women to travel to access an abortion was won 21 years ago and enshrined in law – why is the state discriminating against women who face restrictions on their travel? Will you now guarantee that there are automatic rights to visas and re-entry from any non EU woman or girl seeking to travel for a termination?

– Who do you think owns women’s bodies? Themselves, or the state? Why was a lawyer appointed to a foetus and who did it? Are women’s bodies in Ireland merely ‘vessels’? Do you plan on entering the 21st Century in regards to providing healthcare and choice to women in Ireland, or are you happy to continue to the pretence that this is a modern, democratic state while thousands of women continue to travel abroad to access abortion, order illegal abortion pills online for which they could face imprisonment under the law passed by you last year, and where the most vulnerable women – the poorest, migrant women, sick women, continue to be gravely endangered?”