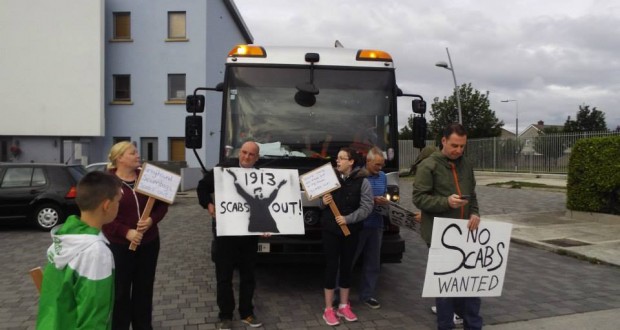 The lockout of 70 drivers and general operatives at Greyhound who refused to accept massive wage cuts is a new low in the waste collection sector. This is the latest episode in the deterioration of the service to the public, as well as working conditions.

Even prior to this dispute blowing up, Greyhound was at the receiving end of complaints from the public about missed collection days. Being concerned with their bottom line they have demanded a massive 35% pay cut from the workforce. This demand has rightly been rejected, resulting in a lockout and the employment of strikebreaking labour via an agency.

In advance of a ballot for official action being processed, the company then obtained an injunction from the High Courts to prevent effective picketing of the depot in Clondalkin without the union SIPTU even being present in the court to make the arguments against. This is the second time this year – after the planned Aer Lingus / DAA workers strike over their pension rights – that a high profile action by workers has been cut across by the courts demonstrating the in built bias of the judiciacry.

The Anti Austerity Alliance & Socialist Party public representatives and other supporters have joined the workers on the picket line and motions are on today’s City Council meeting agenda supporting the workers. Dublin City Council should tear up the contract it has with Greyhound and the service be taken back into local authority ownership, guaranteeing the jobs of the workers.

It has been demonstrated in practice that in terms of workers’ rights and service to the public, waste collection should again become a public service funded through general taxation. In the meantime, we encourage the Dublin public to let Greyhound know what they think of its lockout of the workers and use of strike breaking labour. However the key to victory lies within the determination of workforce and potential support that could be built among other workers.

As long as the scabbing operation continues this dispute has the possibility of being protracted. The trade union movement as a whole is again confronted by the limitations placed upon it by the Industrial Relations Act and Public Order Act which together try to prevent effective action. If these acts were challenged on the basis of trade union backed action with mass support they would become a dead letter. It is absolutely legitimate to raise such points when livelihoods and the credibility of the trade union movement and its ability to win strikes is on the line

Join the march today from Liberty Hall to City Hall in support of the workers.