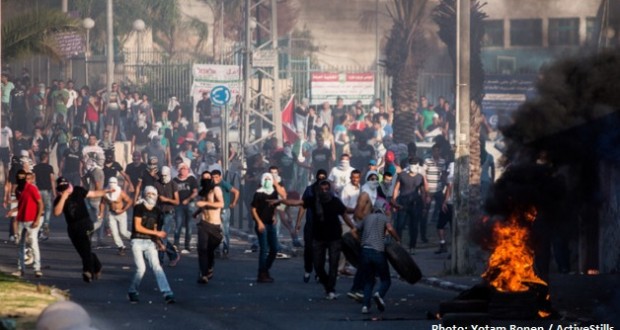 As this article is published the Israeli government has launched another series of air strikes and bombardments on the besieged population of Gaza under the name operation “protective edge”. The death toll in Gaza since the beginning of the present onslaught has reached 11, among them two children under five years of age. At least 75 Palestinians have been injured since Monday. This is yet another step of escalation by the Israeli government that brings closer the threat of a wider conflict.

Israeli prime minister Netanyahu and other government ministers felt compelled to condemn the appalling murder of east Jerusalem Palestinian teenager Mohammad Abu-Khdeir, but they shed crocodile tears. The tragic developments of the last few weeks reflect first and foremost their policy of the ongoing repressive occupation of the Palestinian territories, and their aggressive programme of Jewish settlements.

Israeli nationalist incitement to revenge following the brutal murder of three Israeli teenagers, whose bodies were found on 30 June, has been voiced by Netanyahu and other representatives of the ruling parties, who want a means of distraction from the failure and catastrophic consequences of their policies. This government of big business and settlements is now struggling to keep control of events that have arisen as a result of its actions and words.

A series of racist attacks in Jerusalem by far-right Israeli nationalists against Palestinian workers and pedestrians – including the killing of Abu-Khdeir on 2 July – sparked a wave of outrage, protests and riots in Palestinian communities across parts of Israel – the most widespread protest movement among Arabs in Israel for years. There have also been joint protests and rallies of Jews and Arabs in Jerusalem, Tel Aviv and Haifa against the far-right attacks and government’s inflammatory stance.

As the Palestinian protests spread, the Israeli media rushed to cover the most disturbing instances of property destruction and attacks on Jewish people, while downplaying the background of incitement, discrimination, racist attacks and anger at the occupation that led to the outrage in the streets.

From the continued occupation and blockades in the Palestinian territories, through to the severe discrimination in all spheres of life suffered by the Arab community in Israel, and the incitement to incessant racial attacks, government policies have created a gunpowder of anger, some of which is exploding in the current events. Palestinian youths, their future crudely trampled on by this right-wing Israeli government, have taken to the streets to demonstrate feelings of alienation, frustration and rage.

After learning of the kidnapping of the three youths, the Netanyahu government exploited the tragic event by promoting their political agenda, fostering an atmosphere of nationalist propaganda, and efforts to dismantle the coalition government of Fatah and Hamas in the Palestinian Authority.

Israeli intelligence suggested that two murder suspects – who have not yet been caught – are junior Hamas activists from Hebron. Hamas denied any responsibility, and it is possible that some of its adherents acted without the knowledge or consent of its leaders or that non-Hamas members carried out the killings.

The government also pursued a military campaign of collective punishment in the occupied territories. Seven, mainly young, Palestinians were shot dead by the Israeli army in raids across the West Bank and at least nine were killed by air force bombings on the Gaza strip, including a child.

Threats to destroy the houses of families of the murder suspects, as well as the decision to demolish the family home of the killer of a police officer who was shot near Hebron, are brutal collective punishments against relatives who have not been convicted of any offence. In one of these attacks on families, a one-month old baby was injured.

The demolitions never “deter” terrorist attacks; in fact experience shows that they are likely to have strengthened motivation in the most desperate parts of Palestinian society to carry out acts of retaliation. Such policy is mainly used to divert attention from the failure of the security strategy of the Netanyahu government in preventing attacks. Similar measures have never been inflicted on the families of convicted Israeli Jewish killers, like that of Baruch Goldstein, the far-right terrorist who perpetrated the Cave of the Patriarchs massacre in Khalil/Hebron in 1993, killing 29 Palestinians and injuring more than 120.

Israeli governments’ attempts to date to ‘discourage’ Palestinian perpetrators of attacks, kidnappings and rocket firings have proved their bankruptcy. Thousands have paid with their lives at the hands of the Israeli forces but no significant problem has been solved. All the ’war on terror’ of the governments of big business and settlements up until today has only spilled more blood and brought about again and again a more complicated situation.

During the first Palestinian intifada, 1987-93, the Israeli government tried to strengthen the right-wing Islamist party Hamas to counter the secular Palestinian organisations that were demanding an end to the occupation. Now, the government is at war on Hamas, causing unimaginable distress and bereavement on Palestinians in Gaza in particular, and is laying the ground for the growth of new reactionary organisations, including al-Qai’da-type groups.

Against the background of Ramadan, regional instability and international pressure on Israel it appears that a majority of the army leaders and the government would prefer at this stage to avoid a major military escalation. Nevertheless, despite this reticence, they have decided to pursue some further military assaults on Gaza, not least to be seen to be retaliating to increased rocket fire from the strip. Troops have been put on notice of “preparation for escalation”, are mobilising along the Gaza border and some reserves have been called up.

In addition, the government may find ways to meet some of the demands of minister Naftali Bennett and the Yesha council (for settlements), by promoting another wave of settlement construction. Netanyahu spoke of establishing a new settlement in the names of the murdered boys, exploiting their deaths to promote the political agenda of right-wing settlers.

There is a great danger of the violence escalating further in the coming days and weeks, whether as a result of military attacks, police repression of the protests, incitement, or further terror attacks by individuals and groups.

Particularly resorting to nationalist demagoguery and incitement are right-wing government ministers Avigdor Lieberman and Naftali Bennett, in a racist effort to mobilise support by exploiting the feelings of shock and insecurity in the Jewish population. Both argue for a major military offensive on the Gaza strip, in other words more bloodshed that will solve nothing, but cause further loss of life and trauma. Gazans would suffer by far the most, but the Israeli public would not escape from the bloodshed, as the rocket attacks bear witness.

Lieberman, who is the foreign minister, has declared the end of his party’s alliance with Netanyahu’s Likud party over the disagreement on Gaza policy.

Lieberman has also utilised the present tension to return to promoting the idea of forcibly annexing Arab communities in Israel to a future Palestinian state. He does not want to recognise the rights of Palestinian citizens of Israel and doesn’t want those communities to be able to democratically decide whether to join a Palestinian state in the future. Rather his aim is an Israel with no significant Palestinian minority in it.

However, reflecting a strongly opposing view and worry among the Israeli elite has been former Shin Bet (Israeli security service) chief Yuval Diskin, who in a Facebook posting last Friday blamed the government for “the rapid deterioration in the security situation” and attacked “the illusion that everything can be solved with a little more force; the illusion that the Palestinians will just accept all that we are doing in the West Bank and not respond, despite their rage, frustration and worsening economic situation; the illusion that the international community will not impose sanctions on us; that Israel’s frustrated Arab citizens will not ultimately take to the streets over the lack of handling of their problems; and the Israeli public will keep submissively accepting the government’s incompetent response to the social gaps that its policies have only worsened, when corruption continues to eat away at all that is good, and so on and so on.”

He warned that even if calm returns, “the combustible fumes in the air will not dissipate, and if we do not dispel them, there will be an even more serious situation.”

Desperate acts of vandalism and nationalist attacks on civilians by a small minority of protesters will not help to bring about a change in government policy and improvements for young Palestinians. Such acts alienate the ordinary people who are victims of them and they are used by the government as an excuse for harsher repression of demonstrators in the name of “zero tolerance”.

However, the scale of the Palestinian protests in Israel sheds light not only on the frustration and distress but also on the potential for a wider struggle against the big business and settler-serving government, against attacks on Palestinians and against the occupation. This struggle requires the building of a democratically organised larger protest movement of Jews and Arabs, with a programme and actions to seriously challenge the Israeli government and far right.

Establishment of action committees in the communities where demonstrations are taking place could help to organise bold steps to further the struggle, including democratically-run self-defence against state repression, and preventing protests descending into self-defeating rioting and nationalist physical attacks. These committees could develop a set of demands, including the requirements for peace and the solving of social ills, which could mobilise a broad layer of Jews and Arabs for joint demonstrations, drawing in workers’ committees and student organisations as well.

Many Israeli people detest the barbarity of the far right, and have had enough of government policies that have only brought another round of violence in the national conflict while the social crisis in Israel deepens. A Knesset Channel poll in recent days showed rising support for the Labor and Meretz parties, indicating that despite the present nationalist reaction, parts of the Israeli public are interested in parties that are seen as being on the left.

Opinion polls continue to indicate that a majority of the Israeli population supports the dismantling of settlements and ending the occupation.

Socialist Struggle Movement argues the need for the establishment of a new ‘struggle’ party of workers, Jews and Arabs, to advance the interests of all workers and to put forward a clear socialist alternative to the future of tragedy that is inevitable in the hands of the capitalists and nationalist right.

• On 2 July, around 1,000 people attended a rally in central Jerusalem entitled “grieve not take revenge”, organised by the coalition “Tag Meir – Light instead of terror”. Afterwards, some participants marched to the prime minister’s office to highlight the incitement that has come from Netanyahu, which has encouraged the violence of the far right.

• The next day, over 1,000 demonstrators gathered in Habima Square in Tel Aviv, also angry at the government’s incitement, and the occupation.

• On 5 July, 300 Jews and Arabs demonstrated in the centre of Haifa in response to a demonstration two days before of 30 far-right demonstrators with a sign saying “death to Arabs” . Among the speakers at the counter demonstration was Shay Galy from Socialist Struggle Movement, who spelt out that during the failed, so-called peace talks the government had: “in less than nine months, managed to approve construction of 13,000 new homes in the settlements, destroyed over 500 [Palestinian] homes in the West Bank and East Jerusalem, killed 61 Palestinians and wounded 1,100.” He went on to demand: “No to military attacks in Gaza and no to the continuation of oppression in the West Bank and East Jerusalem. Yes to real and equal security for Palestinians and Israelis.”

• The family of one of the three killed Israeli teenagers publically condemned the murder of young Palestinian Abu-Khdeir and contacted his family to give their condolences. In parallel, Palestinians from the Hebron area went to this same religious Jewish family’s house (which isn’t in a settlement) to give condolences. 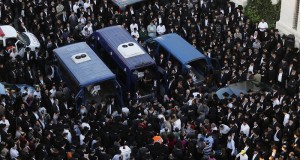