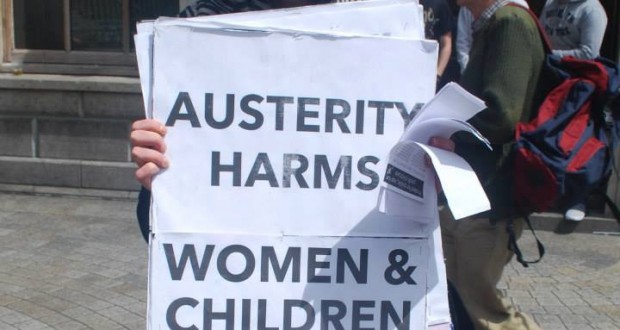 Being a young immigrant woman I have first hand experience of the “new jobs” created during this so-called recovery.

I know what it is like to be a charity fundraiser, struggling every day to sign people up while dealing with sexual objectification and extreme stress, because at any moment you can lose your job.

I’ve felt what it is like to be a salesperson, working more than eight hours a day and getting paid nothing because you didn‘t sell enough.

I know what it is like to be a fast food worker, where you work a demanding job under enormous pressure, zero hour contract for less than the minimum wage.

I know what it‘s like to be a house keeper, when you receive a text from your friend saying “I‘m going to clean a house, guy sounded a bit odd, so in case something happens this is the address where I‘m going to be“. Receiving text messages asking “Are you offering only house keeping services?“ and blatant sexual propositions.

I know what it is like to be a baby sitter, working with no contract, losing a job and a place to live, because the family decide that they can pay less for a younger local girl.

It is very difficult being a young immigrant woman trying to survive in Ireland, with no family, high rents, and no decent jobs.

It is upsetting to hear the propaganda and lies about immigrants getting enormous state benefits and living in fancy apartments provided by the government! We need to challenge this. We need to unite as workers, refuse to believe the lies of the establishment about women, youth, immigrants and the unemployed and unite to fight for equality, and a decent living wage.