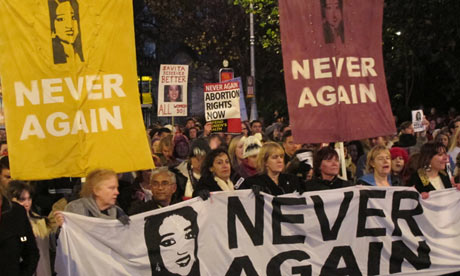 Socialist Party TD Ruth Coppinger commented on reports in the media today surrounding the release of guidelines for medical practitioners on abortion:

The decision to have an abortion should be the choice of the woman, and the woman alone. It should not depend on having three doctors confirm that there is a threat to a woman’s life, it should be a choice.

In terms of the guidelines which were reported on today, they highlight the problems with the legislation, which is very narrow, and forces a woman to run a gauntlet of doctors and bureaucracy to access an abortion. The idea that suicidal women would be left waiting for referrals etc. is totally unacceptable when the time sensitivity of the decision to terminate a pregnancy and the risks for abuse by doctors who may have a so called “conscientious objection” are taken into account.

This will do nothing to help women who want to have an abortion in Ireland. They will still be forced to leave the country and arrange travel, accommodation and cover for other responsibilities including childcare and/or taking time off work to go to Britain to access what should be freely available to them at home. Women with mental and physical health concerns should not have to deal with these extra pressures when terminating a pregnancy.

We need to repeal the 8Th Amendment and make abortion free, safe and legal in Ireland.