Kelly Bellin is an activist with Socialist Alternative, CWI US
Unless drastic action is taken to reduce the emission of greenhouse gases, the planet will heat up by a minimum of 4ºC by 2100, according to the most recent research.

That takes the global forecast up to twice its current level, from “dangerous” to “catastrophic,” as recognized by governments around the world. The study, published in the journal Nature, found that as the planet continues to heat, fewer sunlight-reflecting clouds form, causing temperatures to rise in an upward spiral.

Faced with a catastrophic future, ordinary people are, understandably, asking themselves what they can do. Corporate media and politicians prey on this sentiment, spinning both the cause and the solution for climate change into an issue of personal responsibility and putting the pressure on working people to save the planet through expensive “green” products and lifestyle changes.

Individualizing the cause of climate change will only conceal the truth. A study published in the journal Climate Change indicated that since the dawn of the Industrial Era just 90 companies have caused two thirds of all man-made global warming emissions. All but seven of the 90 were energy companies producing oil, gas and coal.

These corporations can’t blame their crimes on ignorance. The Guardian reported that “Half of the estimated emissions were produced just in the past 25 years – well past the date when governments and corporations became aware that rising greenhouse gas emissions from the burning of coal and oil were causing dangerous climate change.” In other words, they dramatically sped up their polluting even after learning about the dire consequences.

These same companies that are destroying the planet are some of the largest financial backers of climate-change-denying propaganda and lobbying. Most energy companies are making record profits and pumping catastrophic amounts of carbon into the atmosphere, then strong-arming legislators into striking down any measures that could compromise their profits.

Between 1999 and 2010, the oil, gas, and coal industries spent over $2 billion lobbying US Congress. Is it any wonder that politicians across the world do not carry out the comprehensive action necessary to hinder the catastrophic trajectory of climate change?

World leaders have repeatedly put forward grand gestures of intent, but they consistently fall short of action since they are held hostage by the pocketbooks of big business. Despite the continual rise of greenhouse gas emissions causing global warming, at the recent UN-sponsored climate talks in Warsaw no concrete measures were put in place to stop this catastrophic threat.

The inaction of governments across the globe will continue as long capitalism goes unchallenged and big business is free to pour billions into securing their ability to pollute. To develop a carbon-neutral global economy, economic and political power must be taken out of the hands of the major corporations that have caused this catastrophic global forecast.

As socialists, we call for the public ownership of these destructive corporations as a major step forward in reducing global carbon emissions. Imagine what could be accomplished if just these 90 corporations were taken into public ownership and run democratically instead of for profit. Public control of the energy industry, for example, could allow for massive investment in renewable energy sources such as solar and wind, implemented through a green jobs program that will create millions of new living-wage jobs.

Now more than ever, it’s clear that as long as big business is allowed to dominate politics, the needs of the environment will not be prioritized above short-term profiteering. While taking on environmentally friendly practices in our daily lives is certainly one part of our responsibility, the larger part – the only part that has the power to actually save the Earth – is fighting the corporate control of politics that is holding our planet hostage.

Saving the planet depends on the environmental movement adopting a clear socialist program to fight climate change through system change. 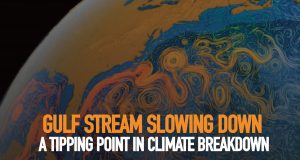