New figures released for 2013 highlight how Ireland is a country of widening inequality, with a massive divide growing between the super-rich elite and big business on the one hand and the majority of the population subjected to brutal austerity on the other.

The four Irish based billionaires on the Forbes rich list might be crestfallen after sliding a couple of places down the global billionaire’s league table but they shouldn’t have too many sleepless nights – at a time of crippling austerity for workers and the unemployed, the members of this exclusive club actually managed to increase their wealth in 2013. Denis O’Brien sits atop the Irish mini-league with an estimated wealth of €4.3 billion (up €580 million on 2012), followed by John Dorrance III at €1.8 billion (up €72 million), Martin Naughton at €1.6 billion (up €145 million) and Dermot Desmond at €1.45 billion (up €145 million). That puts the combined wealth of just these four individuals at an obscene €9.2 billion.

Examining wealth distribution in more detail, the Credit Suisse Global Wealth Data Book 2013 reveals the full extent of the concentration of wealth into the hands of a few and explodes the myth perpetuated by the capitalist establishment that the country is “broke”. Their figures suggest that Ireland’s own members of the global top 1% –115,000 people – own a staggering 27.1% of the wealth. According to the report, there are 77,000 US$ millionaires and 4,886 people who own between $5m and $10m in the country.

Big business also continues to reap the rewards of a tax regime which leaves their considerable profits largely untouched. The Comptroller and Auditor general’s own report shows that an estimated 89% of companies pay zero corporation tax, with two thirds of all corporation tax paid by just 0.1% of companies. With an effective corporate tax rate of just 5.2%, Ireland now ranks second from bottom in the list of EU-15 countries under this heading. For example if corporations were taxed even at the very low rate of 13.4% (EU-15 average rate), it would raise an extra €6 billion for the exchequer.

Contrast the fortunes of the rich and big business with those of working class people. A half decade of austerity and downward pressure on wages means that the average private sector wage is now €24.57 per hour, 14% below the EU-15 average and ranking Ireland in 11th place out of the 15. When comparisons are made with similar small, open economies the situation is worse, with Irish wages falling 30% below average. Wages in the low paid sector also fall even further behind the EU-15 average, creating an ever growing layer of “working poor”. In addition, the rate at which Irish wages increase is amongst the lowest in the EU-15. It should be of no surprise then to learn that Irish labour costs make up a smaller portion of operating costs than other EU-15 members and that Irish profits are now growing at a faster rate than profits in the Eurozone.

The policy of sacrificing working class people to allow big business and the rich to hoard profits must end. A series of wealth taxes should be introduced to target the super rich, the proceeds of which could be used to invest in job creation. The trade union movement most also embark on a serious campaign for better terms and conditions for all workers. 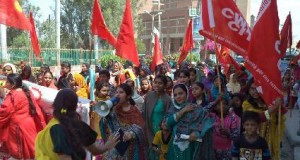