Paul Murphy, members of the Socialist Party, and many more supporters of Paul’s work as an MEP have put in a huge effort to highlight crucial issues and to put Paul in the best position possible to retain the seat won by Joe Higgins in 2009, which Paul took over three years ago in March 2011.

Fighting on the key issues

Paul was a leading member of the campaign against the Household Tax since it was first implemented at the start of 2012 and has also spoken out consistently against the new Water Tax that is due in October, and which represents a huge, generalised attack on living standards. Many people are already really struggling and can’t make ends meet meaning that the water tax will sink many households.

Paul has also played a very important role in campaigning against the so-called Youth Guarantee, which will not be funded properly, will not provide real training or education and certainly will not lead to real jobs for the 25% of young people who are unemployed. In fact, the Youth Guarantee will in effect make participation on in the free labour scheme, JobBridge, obligatory.

Likewise, the new Gateway scheme will be obligatory for others on the dole. These schemes, which pay €1.25 or less an hour, really show the hollow nature of the “recovery” in Ireland and they constitute a turning point in the strident attempts of the capitalist establishment and the state to cut wages and develop Ireland as a low wage location and economy. In contrast, Paul Murphy MEP is demanding an end to the reliance on the private sector and for major public investment, funded by not paying the debt and increased taxation on the super rich and big business, to provide the jobs we require with decent pay and conditions.

Paul’s pre-election work and his election campaign itself will put the continued austerity and diktats from the Troika centre-stage. The initiatives that Paul’s campaign has organised, including countless public meetings, street meetings, street stalls, protests and conferences, combined with Paul’s strong performances in the media, have resulted in a significant increase in the public recognition of Paul himself and of the strong campaigning role he is playing as an MEP. We feel that we have strengthened our potential to do well in the election and retain the MEP seat in the election on 23 May.

Of course getting elected will still be far from easy and the field of candidates in the Dublin constituency is already quite crowded. This fact is precisely why the Socialist Party criticised the decision of the Socialist Workers Party and the People Before Profit Alliance to stand Brid Smith in this contest.

We don’t in anyway deny their right to stand. Instead we questioned whether exercising that right on this occasion would make it easier or more difficult for Paul to retain the seat which he has used so effectively on international and on domestic issues on behalf of the working class movement over the last three years. Clearly in this concrete instance, Brid Smith standing complicates this task. Unfortunately, it is clear that the SWP/PBPA have not considered the genuine appeals made to them from different sources to reconsider their stance.

Notwithstanding that, members of the Socialist Party have met with representatives of the PBPA to discuss the European Election. While we have not come to a formal agreement yet and more discussion is due, the Socialist Party is in favour of each candidate and campaign publicly advocating that their supporters should transfer immediately to the other candidate by giving her/him their second preference.

Specifically, the Socialist Party favours that on the main leaflet that each candidate produces during the campaign, that there would be a clear call for a number two vote for the other candidate. The same should be advocated by the candidates when asked by the media during the election campaign about who they would urge their supporters to transfer to.

Furthermore, the Socialist Party will propose to its colleagues in the Anti Austerity Alliance in Dublin, that when commenting on the Euro election on AAA local leaflets that a number two vote for Brid Smith should be advocated. We hope that the PBPA candidates in the local elections in Dublin will do the same for Paul Murphy MEP.

We believe that such a transfer arrangement is the type of agreement that is most appropriate in the circumstances to maximise the effective left vote in the election given that there will be two left candidates. 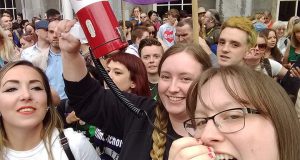 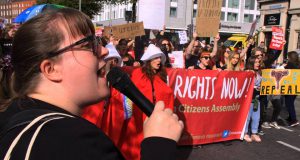