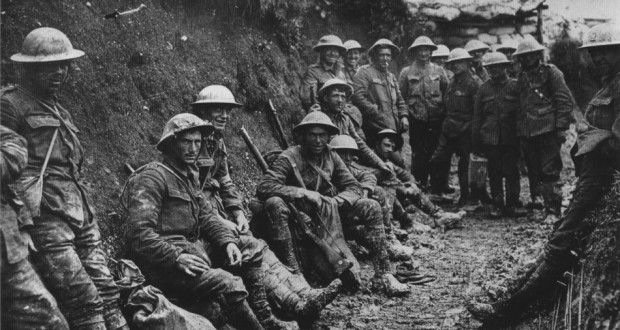 This year marks the centenary of the year when the imperialist powers of Europe marched an entire generation of young people off to the trenches and battlefields of Europe.

Many films and books such as ‘All Quiet on the Western Front’ and the biting satire of ‘Blackadder Goes Forth’, have graphically illustrated the criminal insanity of the slaughter that followed the outbreak of the First World War in August 1914.

An estimated 10 million soldiers, (including 50,000 Irish people) ,were killed as a bloody stalemate of death and carnage ensued. Over the next four years, both sides only ever managed to advance of couple of kilometres against their respective enemies.

During the war the innovations and technology developed in the latter part of the 19th century, that offered the potential to transform the lives of working class people for the better, were deployed for one purpose and one purpose only; the destruction of human life.

For soldiers on both sides, the horror of the rain soaked, muddy and rat invested trenches and being forced “over the top” to confront a hail of bullets from machine guns was compounded by gas attacks, flame throwers and tanks. Ten years after the Wright brothers had first developed aircraft as a mode of human transport, airplanes were, for the first time in human history, used to rain down bombs on civilian areas.

Prior to 1914, sabre-rattling between the major powers and the massive increase in the expenditure on armaments became the order of the day. The drums of war were beaten all over Europe and with it came a wave of racism and chauvinism.

Naturally, all the protagonists in the war sought to portray the supposedly benign motives that lay behind their participation. Britain and France claimed they were opposing “German militarism” and defending “poor little Belgium”, likewise Germany claimed it was waging a war in “defence of the fatherland”.

The real reasons that lay behind the war show the cynicism and hypocrisy that lie behind these claims.  From the 1860s onwards, the development of the age of imperialism meant that the capitalist countries of Europe, the US and Japan now vied for control of the world market and for the profits that could be reaped from the exploitation of the resources and markets of the countries of Asia, Africa and Latin America.

By 1900, 90% of Africa was now colonised by one of the major European imperialist powers. In 1879 this figure had stood at 10%, bringing death and destruction to the African population they now occupied and oppressed.  Indeed, in the period from 1891 to 1911, 10 million Congolese were massacred by “poor little” Belgian imperialism as it sought to plunder Congo’s ivory and rubber.

The war and the years of tension preceding it were simply an expression and continuation of this competition to exploit and control the world for the profits of big business and financiers.

In Ireland, Home Rule leader, John Redmond, acted as the chief recruiting sergeant for the British Army. James Connolly stood out against the war-mongering of the likes of Redmond and the leadership of the workers’ movement internationally. When war broke out he declared that:

“Should the working class of Europe, rather than slaughter each other for the benefit of kings and financiers, proceed tomorrow to erect barricades all over Europe…we should be perfectly justified in following such a glorious example and contributing our aid to the final dethronement of the vulture classes that rule and rob the world”.

A small but important minority of anti-war socialists such as Lenin and Rosa Luxemburg echoed these sentiments. They saw the war and the crisis of capitalism it reflected as a prelude to revolution. This perspective and analysis was borne out by the victory of the Russian Revolution in October 1917 and the revolutionary wave that swept Europe in its aftermath that ultimately brought the war to an end.

It is clear that the capitalist establishment will repeat the lies used to justify the slaughter of 1914-1918. In Britain, the right wing Daily Mail and their allies in the Tories have attacked the producers of Blackadder and various academics for spreading “left wing myths” about World War One claiming it was brought about by “German aggression”.

Needless to say, none of them will be to keen to repeat the mantra put forward by the leaders of Europe in 1914 that it was the “war to end all wars”. The colonial adventures and wars of the 21st century, (not to mention those of the 20th century),  such as those in Iraq and Afghanistan give lie to this.

100 years on, capitalism is still bringing horror without end to humanity. The need for a democratic socialist society based on global human co-operation and production for need, not profit, has never been more urgent.