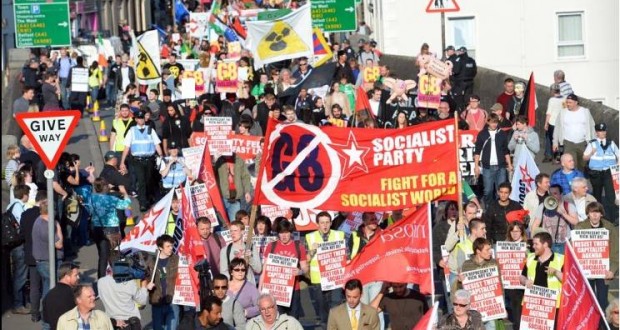 The socialist alternative to G8 tyranny

Not since its 2001 meeting in Genoa, which saw 200,000 protesters take to the streets has the G8 dared to meet in an area accessible to protesters. However remote a place they choose, they are met by protesters opposed to austerity, war and environmental destruction, but what is clear is that protesting is not enough. We need to build an alternative that is in the interest of the 99% not the dictatorial rule of the 1% – a socialist alternative.

The main institutions of capitalism including its political parties face not only an economic crisis but one of political legitimacy. When Francoise Hollande last year in the course of the French elections spoke out against austerity in Europe, he had an approval rating of 59%. Now, one year into his government his approval rating has plummeted to around 25% – the sharpest fall of any president in half a century! In America partly as result of the Occupy movement, there is a growing rejection of the system among young people with 47% saying they are opposed to capitalism.

The money exists, but is in the wrong hands!

In Europe, millions of young people are becoming the lost generation, with youth unemployment in Spain as high as 60%. Across the globe almost half the world’s population live on less than $2.50 a day. According to the IF campaign, 1 in 8 people don’t have enough food. 2 million children die every year because they can’t get enough to eat. Yet year on year, in the course of the greatest crisis since the great depression, the top 1% who the G8 faithfully represent have got richer.

The Sunday Time’s Rich List provides a “who’s-who” of Britain and Ireland’s fat cats. This year their combined wealth amounts to almost £450 billion – that’s an increase of more than £35 billion from last year! Topping this year’s list is Russian iron-ore tycoon Alisher Usmanov with £13.3 billion. His wealth alone would be enough to cover the extra £10 billion welfare cuts that George Osborne announced at the end of 2012, the £2.5 billion cuts he announced in his March budget and the ‘savings’ expected from the bedroom tax!

Socialists say that the vast wealth that exists in society should not be left lying idle in the bank accounts of the super-rich while there is mass unemployment and millions across the world suffer from hunger and malnutrition. We say that the massive wealth of the major corporations that dominate the world economy should be taken into public ownership, so that ordinary people can democratically decide how best to use this wealth for the benefit of humanity, not the naked race for more profits.

Take for example Bill Gates, who has retaken his position of richest man in the world. His total wealth amounts to $66 billion. This one person has enough money to eliminate world hunger twice over, according to estimates by Oxfam and still have a cool $6 billion in change!

Not only could the economy be democratically planned by ordinary people – under socialism it would possible to use this massive wealth to transform society and run it in a more efficient way to meet social need. Even in the course of the economic crisis, the world powers (particularly the G8) have spent a colossal $1.75 trillion on arms! The arms industry is highly profitable, and is an indispensable part of world capitalism where rival powers compete militarily for access to resources and markets as well as arming pro-Western dictatorships to put down civil unrest. Instead of producing arms, a socialist society would re-tool the arms industry and use the technology and skills to produce socially useful products and technologies.

The fact that multinational companies fiercely compete to develop a certain product means that a lot of research is kept secret and duplicated. Socialism would eliminate this, thereby saving a huge amount of resources and bring together research to work in a co-operative way. The competition between capitalists also means a massive $1 trillion is wasted annually on marketing and advertising. Again on the basis of planning the economy this would be unnecessary.

One of the biggest problems throughout the world is the effects of mass unemployment, particularly youth unemployment. If the £750 billion sitting in the banks of British companies were used to create green jobs, it could more than wipe out unemployment. On top of this, by planning the economy we could cut the working week without having to cut wages, so workers would have more free time as work would be shared out amongst more people. All wealth in society is created by workers – manual and non-manual. Under capitalism, wealth is taken from workers in the form of profits. Socialism would use the wealth that workers create to benefit the needs of all, not to enrich a small minority.

The capitalist system is rotten

Is there an easier way? Can we just lobby the politicians? When the G8 met in Scotland in 2005 they were met by 100,000s fighting to “make poverty history”. The politicians made grand promises but they failed to deliver. The super-rich won’t just hand over their massive wealth – it will take a mass movement of working people to take control of their workplaces, communities and all the major institutions. The experience of the Arab spring demonstrates that even brutal despots can be defeated by a mass movement. But to solve the problem of poverty, there needs to be a break with the system, which means not just building opposition to capitalism but building a mass socialist alternative.

This would also mean a struggle for a government of working people. Instead of elections every two or four years to determine if tweedle-dee or tweedle-dum capitalist political parties run things, a socialist government would be composed of regularly elected representatives from workplaces and communities, who would live on a workers wage, not the huge salaries of the politicians in the G8.