Speaking at a press conference convened this morning in response to the Budget, Socialist Party TD Joe Higgins said: “The draconian proposals for the attempted implementation of the new Property Tax have the stamp of a Troika dictat and verge on a financial dictatorship attacking low and middle income households. The proposal is a grotesque abuse of Revenue powers to try cow home owners but there will be massive anger, discontent and active resistance.

“However, the lesson of the household tax is that boycott works and if a huge majority don’t cooperate with the form-filling and registration process in March and April next year, the government can face the same political crisis they faced in 2012 with the household tax.”

“This will be a despised tax for workers, the unemployed and pensioners who will look for a way to resist it. Workers must put their trade union leaders under massive pressure to get off the fence on the Property Tax. The trade union leaders must supplement the huge boycott by householders with powerful mobilisations and also by considering how workers charged with implementing these draconian measures can refuse to implement them.

“This budget is a continuation of the war on working people, the unemployed and students. The figures available prior to this Budget in terms of household income surveys, mortgage arrears and various poverty indicators will all, without exception,  get worse on the basis of yesterday’s Budget announcement.

“The union leaders must join the Europe-wide resistance to austerity taking place throughout Europe and the European day of strikes  in March.”

“Minister Noonan seems to live in a bubble of positivity judging by his opening remarks in his speech where he claimed that the signs of economic recovery are manifest. The precise opposite is the case when one looks at the up to date forecasts for economies across Europe and beyond. He twice boasted of Ireland’s improved balance of payments figures. What he failed to say though was that most of these ‘improved’ figures can be attributed to a collapse of imports reflecting the ongoing decline of domestic demand.

“Given that this government has hitched its hopes on a recovery led by exports we can see that the basis for a further descent next year. Practically every cut and imposition in this budget will further the crisis.

“The core of the economic crisis can be located in the collapse of investment and the debt. The budget fails to address either. The United Left Alliance pre-budget statement to which we contributed laid out a bold programme of repudiating the debt and major public investment in necessary public works. Only radical policies like these can go anywhere near dealing with the effects of the crisis 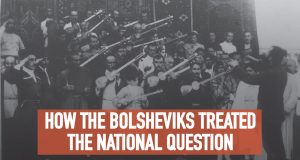 How the Bolsheviks Treated the National Question