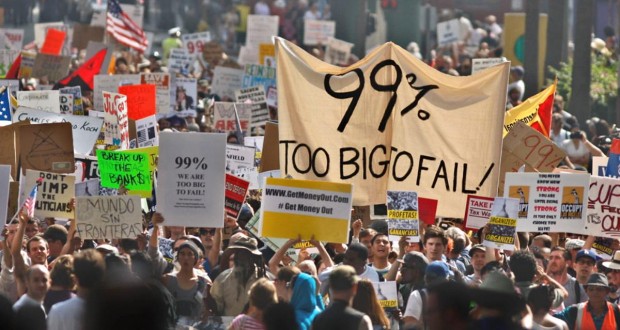 Fight for a socialist society!

Socialists are for massive investment in new jobs and for retooling the economy to both protect the environment and put all the unemployed back to work. Democratic planning by the majority of society could ensure that everyone has a good job and that the economy provides the products we need.

Every unemployed person is a wasted resource that could be produc­tive in a new socialist economy and society. Full employment would provide a massive increase in wealth. This would allow society and the global economy to get out of its crisis and provide a living-wage job, decent housing, and quality health care for everyone.

By taking decision-making out of the hands of the owners of the huge energy companies and affiliated industries, socialist policies would be able to not only create tens of millions of new jobs but also transition the economy away from fossil fuels, which are threatening to destroy the planet as we know it.

Nothing short of a planned, full-scale overhaul of the methods by which our society’s goods are produced, distributed and powered will be sufficient to reverse the damage being done to the Earth under capital­ism. In November 2009, Scientific American published “A Plan to Power 100 Percent of the Planet with Renewables,” showing it is possible to meet humanity’s energy needs from renewable sources.

Socialism is a very simple concept. It is the idea that ordinary work­ing people can run their workplaces, schools, and society without bosses. Workers already make all the products, provide all the services, and distribute all the goods.

The capitalist elite hardly step into the workplace. Their social role has been to pick off the profits and to orchestrate their right-wing political parties to ensure their needs are met and there is no challenge to their system. They hoard cash and find new ways to exploit us. Profits are made by exploiting workers and cutting corners, which destroys the environment

The majority of working people – the working class – already runs this system. Our power is enormous if we are conscious of it. This coun­try would stop without our labour. Our same labour can build a new and far better society, based not on profit but on mutual cooperation and democratic planning.

In a socialist society, a democratic plan would be drawn up by the majority of the population based on their needs. In that way, the needs and priorities of the people in society can be worked out. A national plan of production, with decision-making taking place at a local, regional, national and international level, would then be drawn up to ensure that the economy is restructured to provide for these needs. It’s not a question of a lack of technical skill, as had plagued human societies in the past. We have the technical skill. It’s a question of power and how decisions are made.

In order to change our society, we need to take the wealth of the 500 largest corporations – trillions of dollars – out of the hands of this elite 1% and put it into the hands of the majority of the population. Then we need to have a broad level of participation at a local, regional, and national level by ordinary workers – not the millionaires who run our present government – to plan how we would administer this wealth to provide for the needs of the majority. That is genuine socialism.