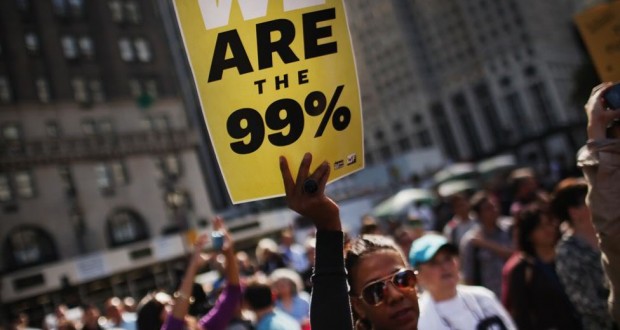 Brandon Madsen is an activist with Socialist Alternative, CWI USA
With the rise of the Occupy movement, opposition to the existing political and economic order has gone mainstream. It’s hard to imagine that the bandana-clad woman on the cover of Time magazine – representing “The Protestor,” Time’s “Person of the Year” – has many nice things to say about capitalism, and the ubiquity of the Guy Fawkes mask – popularized by “V for Vendetta” – further underscores how widespread the idea of revolution has become.

However, this growing support for system change has not yet been matched by a serious public dialogue about what an alternative might look like. A new Pew poll in the US, published in December 2011, indicated that people who are under 30 or black are more likely to favor socialism than capitalism, but this does not correspond to clear ideas of what socialism is or how a socialist economic and political system would work. We offer up this FAQ as a contribution to the discussion.

How would a socialist economy work?

Under capitalism, institutions where immense wealth is concentrated (corporations) run the economy, exploiting working people to increase their own concentrated wealth. The essence of a socialist economy is to flip this relationship upside-down, with working people running the economy, utilizing the enormous wealth and productivity of society to enrich their lives. To do this, we would have to take over all the biggest banks and corporations and put their resources into public ownership and democratic control.

Employing those out of work and reallocating investment and jobs towards social priorities – healthcare, education, clean energy, etc. – would give a huge boost to productivity and wealth in society. Democratic planning of the economy would allow us to make sure everyone had a good-paying job, high-quality health care, free education at all levels, and, of course, basic physical necessities like food and housing. It wouldn’t be limited to just the basics, though; we could choose to invest in empowering people to make music, art, writing, film, fashion, and all sorts of other forms of cultural development.

This type of economic system would require conscious planning, but this is already true to a large extent under capitalism. Corporations, with economies larger than entire countries are able to plan out their levels of production, spread of distribution, pricing schemes and so on without falling to pieces, so there’s no reason working people shouldn’t be able to do the same.

The difference is that planning under capitalism is fractured, incomplete and undemocratic, with the goal of maximizing profit for the individual firm. Under socialism, we could structure investment of the world’s wealth with a big picture, bird’s eye view of the whole economy, with the goal of fulfilling human needs, sustaining the environment and enabling a liberated human existence.

A socialist economic system would have to be globally integrated. This is also the case already under capitalism, where we live in a globally interdependent world. Right now globalization on a capitalist basis means brutal exploitation of the weaker economies, and a race to the bottom for workers everywhere. Under socialism, global economic integration would be part of the plan to enrich people’s lives on a global scale.

A socialist economy would handle the environment very differently. Today, companies don’t care about environmental costs because they are able to externalize them onto the public. The costs associated with contaminated air and drinking water are real, but they don’t show up as a red number on Monsanto’s balance sheet. That is why no corporation will ever undertake the necessary steps to save the environment on the basis of “free market” principles.

Democratic planning of the economy would eliminate the profit motive behind externalizing the costs of pollution. Instead, efficiency, environmental sustainability and meeting the basic needs of all would form the core principles of economic decision-making. Instead of inadequate measures like energy-efficient light bulbs and recycling-awareness programs, a socialist economy could invest in completely overhauling the way everything is produced, utilizing all the latest green technologies for maximum sustainability and creating millions of jobs in the process.

How would a socialist democracy work?

As most of us currently experience it, “democracy” boils down to voting once every couple years for which wealthy career politician will make all the decisions for us. Of course, there’s nothing democratic about this at all, especially when the whole process is corrupted by corporate money.

In contrast, socialist democracy would take place day to day, week to week, in every workplace, school and community. Workers would rotate management tasks, and elected managers would be subject to recall and replacement whenever the workers saw fit. All decisions could be overturned by majority vote.

School curriculum and policy would be jointly agreed upon by parents, teachers and students, rather than imposed by distant administrators and bureaucrats. Neighborhood assemblies would decide who is and is not empowered with policing authority and instruct elected officers how to prioritize their efforts.

All investment and economic decisions should be made democratically. Workplace and neighborhood assemblies would elect representatives to massively expanded local and regional councils, which in turn would elect national representatives. Elected representatives should have no special privileges or pay above their electorate, and they should be subject to instant recall.

In order to facilitate this process of democratic decision-making, there should be space roped off in regular work and school schedules for decision-making meetings and discussions. With the increased wealth created, the work-week could be shortened without loss of pay to allow people time and energy to become engaged politically, and to pursue their other life goals outside work and school.

Undoubtedly, in the first stages of a socialist society, a struggle against careerists and corruption within the system would be necessary. The poisonous ideological baggage inherited from centuries of class rule would not just fade away overnight. However, by establishing public ownership of society’s productive resources, eliminating privileges, and creating bottom-up structures of democratic management and control, the obstacles to prevent aspiring bureaucrats seizing power would be immense.

The main example driving fear of a bureaucratic takeover is Stalin seizing power in the Soviet Union only a few years after Russia’s working-class revolution in 1917. This tragic degeneration of the Russian Revolution is something Marxists have grappled with in numerous books. The basic conclusion supported by a serious historical analysis is that this degeneration was neither natural nor inevitable, but the result of particular circumstances.

Russia was among the poorest countries in the world at the time of its revolution, and it was even further devastated when the deposed capitalist rulers, backed by 21 foreign armies, tried to violently retake power from the democratic workers’ movement, resulting in a bloody civil war. Though revolutions took place elsewhere across Europe, most notably Germany, they were all defeated, leaving Russia poor, broken and alone.

This was not a healthy ground upon which socialism could be built. The whole basis of socialism is having enough to go around, but Russia didn’t have that. In this context, the democratic structures in the Soviets (workers’ assemblies) ceased to function. Who wants to go to political meetings when you’re worried about where your next meal is going to come from?

It was this vacuum of workers’ power from below, fueled by the isolation and economic starvation of the country, that spawned the bureaucratization of Russian society and the rise of Stalin as this bureaucracy’s dictatorial figurehead. Even then, it was not a natural progression. Stalin had to jail, murder, exile, or otherwise force into submission literally millions of people whose only crime was adherence to the democratic principles of the 1917 revolution.

This experience shows the importance of building the fight for socialism as a global movement. Because of imperialist plundering of resources around the world, some countries may lack a stable economic basis for socialism, and will need to trade with and get help from the richer countries. If Russia had been joined by a successful revolution in even one other country, such as Germany, history would have turned out very differently.

Wouldn’t it be easier to reform capitalism?

Unfortunately, contrary to official accounts, the history of capitalism is not one of consistent progress towards ever loftier heights of democracy and prosperity. Rather, every serious reform has required mass struggle, often shaking the system to its core.

Reforms are not granted out of the kind hearts of well-meaning politicians, but are concessions grudgingly granted to appease or distract rising movements of working people hungry for real change. Whether we’re talking about civil rights, the weekend off, or the right to organize a union, every one of these required an all-out fight against the profit-driven logic of capitalism, where countless innocents were murdered by elites desperate to put down their struggles.

Under capitalism, even these partial reforms are not permanent, not a foothold or new baseline to work from. As we have seen in the last few decades, the capitalists and their politicians will roll back reforms as soon as they think they can get away with it.

Social programs that people fought tooth and nail for in the past are being dismantled or undermined via budget cuts. After almost destroying unions in the private sector already – where less than 7% of workers in the US are in a union – corporate politicians in state after state are now going after the public sector, where over a third of workers are still unionized.

A stable basis for ongoing reforms will require working people to take political power out of the hands of the capitalists and wield it themselves – that is, overthrow capitalism and establish socialism. There’s no way around it; the fight for reforms and the struggle for socialist transformation are one and the same.

Socialism sounds great on paper, but is it realistic?

The only constant in history is uninterrupted change. From ancient slave states to the feudal landowner lordships to the global capitalist system of today, people have repeatedly overthrown old systems after they became a brake on progressive development. The truly unrealistic and utopian idea is that problems like war, poverty and environmental devastation will be solved on the basis of capitalism.

Though socialism is realistic, it’s not inevitable. Again and again, crisis-ridden capitalism has forced workers and the oppressed into revolutionary uprisings. Several have happened in the last year, most prominently in Egypt and Tunisia. But while many revolutions succeed in toppling governments, few have achieved system change. Capitalism will always find a way out on the backs of workers, youth and the poor if we fail to replace it with something better.

That’s where socialists come in: We take seriously the study of history, learning from both defeats and successes of revolutions and mass movements. We aim to spread these lessons widely so that future revolutions succeed in establishing socialism. That doesn’t just mean reading a lot of books. It means actively building and engaging with the movements that exist right now, boldly bringing in socialist ideas while learning from others in struggle, working out the way forward together.

If you agree with these ideas, consider joining the Socialist Party today.