Will we see a clone of the mummified political corpse of the PDs with rumoured new party?

It’s a measure of the stagnation of establishment politics in this State that some media circles are reacting with frissons of excitement to rumours that former Progressive Democrat Leader Michael McDowell might form a new political party. Their excitement gives way to breathlessness at a suggestion that McDowell might be joined in such a venture by another former PD member, Pat Cox.

What on earth could a political party led by this duo contribute toward a resolution of the present mess in the current economic and financial arena? Have the pundits forgotten already that it was the reactionary policies of deregulation, liberalisation and privatisation implemented worldwide over the past thirty years that precipitated the crisis in wide swathes of the world’s capitalist economies? The very same policies that the Progressive Democrats advocated since its inception in 1986, with these two gentlemen as prominent members.

Have they forgotten the crucial contribution made by the same PDs to the very special Irish manifestation of that crisis? The PDs were the political pimps for the buccaneering property speculators and their senior bankrollers in Anglo Irish Bank and elsewhere. With Fianna Fail, they legislated for the institutionalised greed that informed key policies of the coalition governments they formed.

But prominent elements in the establishment media were always inexplicably obsessed with the vagaries of Mr McDowell’s forays in the political arena. When this favourite oracle pronounced on just about anything, critical faculties often deserted attending members of the assembled press.

The instance that most stands as an illustration was a broadside by McDowell, when Minister for Justice, against the rising costs of the Planning Tribunal. At the gates of Leinster House, the Minister fulminated that these costs were excessive and that the taxpayers could not be expected to continue to pay huge fees to Tribunal lawyers. RTE’s evening news obliged him with a prominent report of his comments while the next day’s printed press portrayed him as a champion of hard pressed taxpayers.

Unfortunately, none of the intrepid reporters hanging on every word of the Minister thought to do a simple check on the background to his comments. Had they done so they would have found that it was McDowell himself who had set the exorbitant legal fees and had actually raised them to the levels complained of years earlier when he was Attorney General. So much for the taxpayers’ champion!

Little wonder then that the former PD Leader feels he can again play his media games and be taken seriously – by certain journalists that is. His comments relating to the need for a new political party were apparently made at a private dinner at the Stephen’s Green Club, from which one can deduce that his audience was not drawn from the ranked masses of the Dublin proletariat. It was supposed to be a private affair except that the speech’s contents were obviously designed to be relayed to journalists who could be counted on to give it a wide airing.

Little wonder that Mr McDowell chose not to make his call for a new party to a public meeting with a cross section of the citizens of the State, for surely they would have greeted the idea of any new entity cloned from the mummified political corpse of the PDs with well deserved derision.

The right wing ground where Mr McDowell might want to plant again his tattered political flag is quite crowded. Fianna Fail is polishing up the family silver of profitable semi-state industries for sale to pay off the gambling debts it recklessly incurred. Fine Gael’s only problem with this is that it isn’t likely to happen soon enough. Labour will soon be polishing its excuses for joining Fine Gael in a coalition government where it will sell out on every vestige of a Left policy.

There is, however, a huge political vacuum on the Left where a new mass party for working people is desperately needed as every passing week confirms that the Labour Party has moved irreversibly into the camp of the political and economic establishment.

In a previous epoch when faced with an urgent need for political representation for working people, the leaders of a fledgling trade union movement rose to the challenge and launched new parties. Unfortunately, most of the present day leadership of the trade unions, far from giving an independent lead to workers, are actively demoralising their members into a resigned acceptance that there is no alternative to the disastrous policies of the current government. An open and honest discussion on how that situation can be changed would be of far more interest to ordinary people rather than giving oxygen to discredited relics of a disastrous regime who sponsored the greed fest that has left so many of our people struggling. 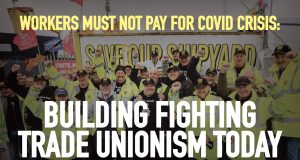 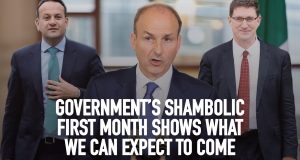