Did the organizers stop at nothing for profits?

20 people died in the horrific stampede at the July 24 Love Parade festival in the German city of Duisburg, 500 were injured and, for a time, over 1 000 people were officially listed as missing. The revellers panicked at a tunnel entrance. But, already in the build up to the parade many thought there was a risk of mass panic developing.

A young woman told German newspaper Die Welt: “Everywhere you looked, there were people with blue faces. My boyfriend pulled me out over the bodies, otherwise we both would have died in there. How can I ever forget those faces? The faces of the dead.” Another participant told Reuters: “There were piles of injured people on the ground, some being resuscitated, and others are dead and covered with sheets. The place was too full in the afternoon as everybody wanted to get in.”

Tragically local people expected the chaos in advance. Already on June 7 someone wrote on the internet site of the local Westdeutsche Allgemeine Zeitung (WAZ) newspaper “Is it true that they try to lead one million people through a single lane street (!)- through a TUNNEL!- Through the Karl Lehr street with two dirt tracks to the festival area? In my eyes this is a trap. This will never work. Those who were (at the previous Parades) in Essen and Dortmund knows how crowded the larger streets were. Even that was a catastrophe. And now they are leading it through a single track tunnel? I’ll be damned!!!! People will be dying when they try to leave the festival area on this mingy street.”

Experts warned the organisers that no more than 250 000 people could fit onto the planned festival area knowing that the annual Love Parades were regularly attended by over a million. But with the help of the city administration and the Mayor Adolf Sauerland (Christian Democrat) the organizers held a Love Parade that attracted 1.4 million visitors who had to pass though this 120 metres long tunnel to reach the festival’ s only entry and exit point. Police experts from all over North Rhine-Westphalia commentated that it’s “a death trap”. And the fire brigade had also warned the organizers.

Dr. Motte, who organized the first Love Parades in Berlin say that “The organisers made gross mistakes in the management. How could they lead the people through only one access to the festival area? It is a scandal. The organizers should be blamed. They knew how many people would come”. He told the Berlin Kurier that this Parade was “all about making money. The organisers did not show the slightest sense of responsibility to people”. Since 2006 Dr. Motte has dissociated himself from the Love Parade as, he felt, it had become unpolitical and commercial. The first Love Parade, held in Berlin in 1989, was a free, peace and music festival that in subsequent years developed into a huge annual youth and music event.

This year’s Love Parade was held in the course of the “Ruhr 2010 European Capital of Culture”, an attempt to develop the prestige of the Ruhr area. Sponsors like RWE, a large energy company, pushed the “Ruhr 2010”, while normal people are hit hard by social cuts. Schools, theatres and cultural centres were been closed.

The boss of the fitness company McFit and Love Parade business manager Rainer Schaller wanted to push through the festival at any costs. One of Schaller’s companies had taken over, and relocated, the Love Parade in 2006 after a dispute with the Berlin city authorities, which meant it could no longer continue there. Last year Schaller told the Handelsblatt newspaper that his commercial interest in the Love Parade was to “use a relatively small budget to gain a high recognition factor”. Now, not to endanger his profits, the organizers even led the party go on without announcing what happened. Hundreds of thousands participants didn’t even know anything about the catastrophe until they went home. The officials were completely overwhelmed with the situation.

Duisburg’s Mayor said: “In the run-up to the event, we worked out a solid security plan with the organisers and everyone involved,” But revellers, who tried to tell police officers about the mass panic, were sent away with comments like: “Do you want to organize this? You have to leave this to us!”

The revellers cannot be blamed for losing control and for stampeding in their mortal fear. The deadly catastrophe is the fault of Love Parade management and the city administration.

The greed of the capitalists often ruins peoples’ enjoyment. This applies to the Christopher Street Day parades, where political material is often forbidden while the participants were bombarded with advertisements of the official sponsors. Similarly the discos and music festivals are overpriced. Big music labels just talk about culture but only think of profits, nothing but profits.

But the initial sadness is now turning into anger. Even the right wing tabloid Bild with mass circulation wrote that in Duisburg “seldom have so many experts warned so clearly of the risks of holding such a mass event on a site that was completely unsuitable. Why didn’t someone do something? Did those responsible for the organising thought that couple of positive headlines were more important than the safety of the participants?” On Sunday Duisburg’s Mayor was attacked on the street, pelt with litter and abused as a “greedy avaricious pig”. People demand his resignation. On July 28 there was a demonstration in front of the Duisburg Town Hall with the slogan: “We fight your greed for profits and prestige!”

Presidential election 2020 & the explosive crises of US capitalism 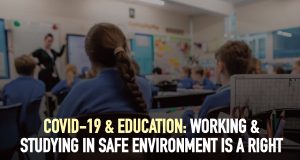