In the run-up to the programme it was revealed that the production company that makes Question Time, Mentorn, had been campaigning to have the BNP on the show since 2007, long before the BNP had MEPs or even a member of the London Assembly. Reports are that its reasoning had nothing to do with ‘democracy’ or undermining the BNP but was purely because they thought it would increase ratings.

This shows the real character of Question Time, which does not lend itself to a serious examination of ideas and the discussion that follows from them. This was more true than usual of this episode. Griffin himself came across as evasive and incapable of defending his own record. But unfortunately, many of the audience would have felt alienated by what seemed to be an attack by the whole establishment on one individual. As a result Griffin was not effectively exposed.

In workplaces and communities up and down the country there has been a far more serious discussion on the BNP’s appearance than took place in Mentorn or the BBC. Large sections of the population have debated whether it was right to invite Griffin onto Question Time, and the likely consequences of having done so.

The Socialist Party campaigned against the BNP being given this platform, arguing that, if the neo-fascist core of the BNP ever got their way it would mean a destruction of all democratic rights, including the right to vote, to join a trade union and to demonstrate; the BNP should not, therefore, be given a platform.

The scale of the campaign against Griffin exerted enormous pressure on the BBC. As a result the programme was turned into a concerted attempt to expose the BNP’s racism and neo-fascist origins. The day afterwards the capitalist media triumphantly declared Griffin’s defeat. He was a ‘bigot at bay’ according to the Daily Mail, ‘loathed’ on the front page of The Sun, and a rat on the run according to the Daily Mirror.

Many of those who watched Question Time would have felt that Griffin had been defeated, mainly by the audience, and would also have been disgusted by his racism and homophobia, as well as cringing at his ineptitude. Unfortunately, however, it is not true that, as the Independent put it, Griffin ‘choked’ on the oxygen of publicity.
Growth opportunity?

A YouGov poll found that, following Question Time, 22% of people would ‘consider’ voting BNP, with 7% saying they would definitely or probably vote BNP at some point. Given that 6.3% of voters in the European elections voted for the BNP, this does not necessarily represent a sudden leap in their support.

A ComRes poll reported in the Independent on 27 October put the BNP on just 2% and drew the conclusion that it had not benefited electorally from Griffin’s performance.

However, it is clear that the BNP could grow as a result of it. The BNP claim that 9,000 people applied to join them after Question Time. While this is almost certainly highly exaggerated, they will have had an increase in membership.

Le Pen, leader of the French far-right party, the FN (Front National), said that he expects Griffin’s appearance on Question Time to lead to the same kind of increase in support and public profile as did his own 1984 appearance on a high profile French current affairs programme – now widely recognised as being a turning point for the FN.

Griffin was attempting to tap into the alienation felt by many workers, mainly ex-Labour voters. The biggest problem with Question Time was the lack of a genuine workers’ representative that could have punctured this attempt, as even the Guardian recognised. Instead Griffin was on a panel with establishment politicians all of whom support anti-working class, pro-big business policies.

Without doubt, many watching felt aggrieved that in order to attack the BNP, Question Time did not take questions on the central issues of the day, not least the postal workers’ strike and public spending cuts. The concentration instead on Griffin, will have increased sympathy for him amongst a layer of viewers.

However, if such issues had been discussed, the nature of the panel would have allowed Griffin to pose as the only politician who stood in workers’ interests. This would have been a lie. At local level BNP councillors have consistently supported cuts. Most recently, in Huddersfield the BNP councillor has called for public sector jobs to be slashed by 25%, even more than the up to £400 million worth of cuts that the Labour council is proposing. Only councillor Jackie Grunsell, a member of the Socialist Party, is actually fighting the cuts.
Divisive policies

And while the BNP would have accurately laid the blame for the postal workers’ strike at the door of New Labour’s market-driven policies, the only means to keep the post service publicly owned is the determined and united strike action that postal workers are currently taking. The BNP has not said it supports the strike. What is more, if the vile racism of the BNP was ever to get a grip amongst white postal workers, such unity would become impossible.

On immigration, Griffin was able to have an impact while saying virtually nothing, as all the establishment politicians competed to sound ‘tough’ on asylum and immigration.

A workers’ representative on the panel could have explained the way that big business has made huge profits under New Labour by driving down wages, and that they have used workers from other countries as a tool to achieve this. Such a representative could then have explained how the only effective way to counter this is not the racism of the BNP, but a united struggle for decent pay and jobs for all.

These are some of the arguments that a socialist could have put on Question Time which would have effectively challenged the BNP. The BBC, however, has consistently refused to let militant trade unionists and socialists take part in the show, most recently Bob Crow, general secretary of the railway workers’ union, the RMT, who campaigned to appear on behalf of ‘No2EU’ – the trade union based European election challenge. But while militant trade unionists are not given a voice on Question Time, the BNP was allowed to spread its poison.

It was correct to argue against Griffin being allowed to appear on Question Time, and there are likely to be similar campaigns in the future. However, if the BNP gets an established platform, there will also be occasions when the campaign will have to be for the right of the workers’ movement, rather than just big business politicians, to take part in the debate. The need for a trade-union based challenge in the general election – against both the big business parties and the racism of the BNP – is now more urgent than ever. 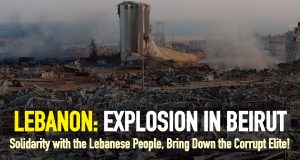 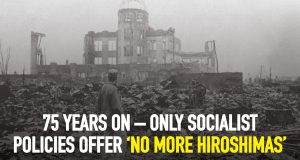