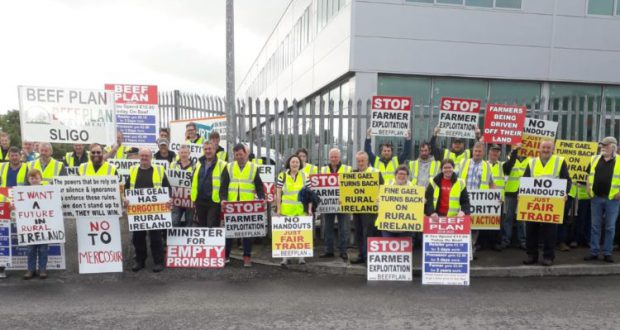 Three thousand workers at 20 meant plants across the State were temporarily laid off on September 10 with the threat of a further 5,000 layoffs looming.The workers are being used as pawns by the beef industry in its titanic battle with the country’s beef farmers over the price paid for calves for slaughter.

The farmers have defied court injunctions and have blockaded the meat plants claiming that the industry is paying them less for the calves than the cost of rearing them. The farmers claim that €10 spent on beef in a supermarket is divided as follows: €2 for the farmer, €2.90 for the beef processors and €5.10 for the supermarket.

In reality this means that the smallest share goes to the farmer who rears the calf for two years, with the largest shares going to the meat industry and the big retailers who handle the calf/beef for a couple of days each. Both workers and farmers have a shared interest in ending the dictatorship of the beef barons who rule the meat industry, and big chain supermarkets who make enormous profits to boot.

These barons have tried to starve the farmers back to work and have employed economic terrorism against the workers in the form of mass layoffs.Meat industry workers are highly exploited.  Many of them are immigrants. Some of them are members of a trade union, SIPTU.  But up until now the meat bosses have been able to refuse recognition and run the plants like dictatorships.

The current crisis shows the urgent need to increase the level of organisation among and between meat workers.  Workers need to organise to oppose the layoffs and seriously consider to organise sit-in occupations of meat plants if they continue.The beef processing industry and major supermarket chains should be taken into public ownership and run under democratic workers’ control and management.  Profit margins should be reduced to allow for a fair price to be paid to the farmers and so that workers wages can be raised.

Placing the industry under public ownership and democratic control can facilitate a fair deal for farmers, consumers, workers and the environment.The current crisis is a forerunner of the crisis that will erupt in the industry when a capitalist Brexit kicks in.

Agribusiness will be at the very centre of the Brexit storm with job losses on an even bigger scale potentially being put onto the agenda. Leo Varadkar’s answer to this is to provide state aid for the beef industry.  This means handing taxpayers money over to the likes of Goodman and ilk who have tried to starve the farmers back to work and to dump thousands of workers onto the dole.