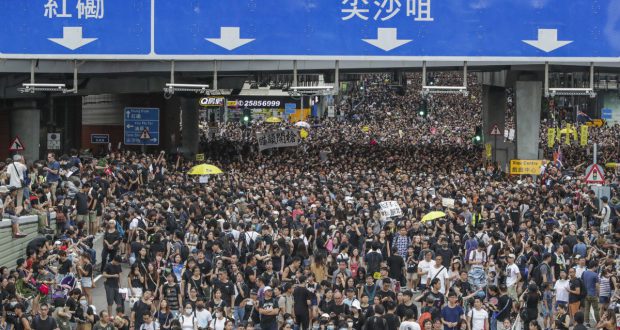 On one side stand a sea of peaceful protesters struggling in defence of democratic rights. On the other, the ranks of Hong Kong’s repressive state apparatus armed with rubber bullets and tear gas, deployed by Hong Kong’s executive and bolstered by the encouragement from the Chinese dictatorship and their media.

That epic face-off and inevitable collision has plunged Hong Kong’s ruling capitalist elite and appointed chief executive Carrie Lam into a deep crisis. It also threatens to puncture the illusion of a Chinese “Communist” Party (CCP) regime that cannot be decisively challenged.

The movement has been sparked into existence by proposed changes to the law which would allow extraditions to mainland China – and therefore expose residents of Hong Kong to China’s deeply rotten legal system, compete with arbitrary detention, unfair trials, torture and forced confessions. Until now China had no extradition agreement with Hong Kong – where the Chinese state’s human rights abuses are well known and widely reported.

Over one million demonstrated calling for the changes to be scrapped and for Lam’s resignation on 9 June. The scale of the protests rocked the establishment and as the government attempted to table the bill for a second time, peaceful demonstrations were violently attacked by police. Rubber bullets and bean-bag rounds were fired indiscriminately into the crowds, injuring dozens.

Forced to delay the bills passage through the Legislative Council on four occasions, Carrie Lam announced a pause in the bill on 15 June. Fearing the impact of the movement in mainland China, Han Zheng – china’s vice premier – met officials to demand a pause and no more concessions. However, the movement refused to be put on pause. On 16 June, two million people took to the streets demanding the bill to be scrapped permanently and for Lam to step down. One in four of the population took part, making this the largest demonstration in the city’s history.

Since then protests outside government buildings, police headquarters and 19 foreign consultants show a movement determined to continue to press on. This is whilst the state’s strong-arm tactics continue to enrage young people in particular, hundreds of whom of which occupied the Legislative council on 1 July until violently evicted hours later.

The Hong Kong executive and the CCP regime in Beijing are desperate to find a path through for the Bill and Lam’s executive – whilst the movement refuses to accept less than for it to be fully scrapped. A deadlock cannot hold. Members of Socialist Action, our sister organisation in Hong Kong, stand shoulder to shoulder with protesters and are calling for a one day political strike as the best weapon in the hands of the movement. Such a strike could bring Hong Kong to a standstill and force Lam from office.

Hong Kongs’ democracy is a sham, rigged to give the city’s super-rich an executive in their – and subsequently, Chinese capitalism’s interests. If Lam falls and an election follows, not only will the movement have scored a major victory – but focus could shift to the demand for free elections and the obscene wealth of Hong Kong’s China-Friendly capitalists. That is not a scenario the Hong Kong executive or the CCP can accept.

In China itself, a defeat for the regime would reverberate – now in the 30th anniversary of the massacre at Tiananmen Square – where the increased rate of arrests and disappearances of workers and students activists broadcast the real fears of Xi Jinping’s regime that opposition to its own rule will spread and deepen. A thousand threads tie China’s dictatorship to the political and economic elite in Hong Kong – the struggle for democratic rights means a struggle to cut those threads. a struggle to take the enormous wealth of the super-rich into democratic public ownership, a struggle for socialist change. Capitalism, in Hong Kong, in China and across the region offers only repression and exploitation. 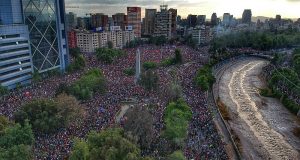