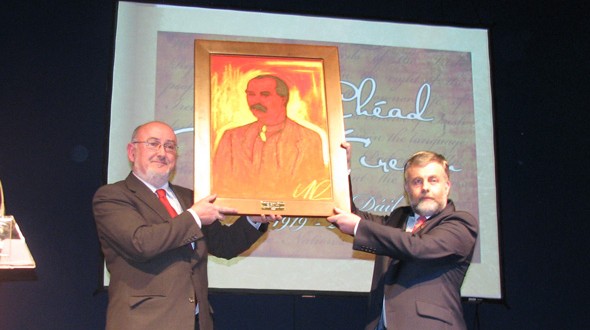 During the last seven years of austerity, the Irish Congress of Trades Unions (ICTU) and its biggest component, Siptu, capitulated utterly in front of the diktats of the financial markets as imposed by the Troika resulting in working class people being forced to salvage the capitalist finance system.

The ICTU and Siptu leadership shamefully supported the abject betrayal of the Labour Party government continuing with the austerity programmes and bank bailouts that Fianna Fail and the Greens began. They refused to mobilise their membership in opposition to the cuts and extra taxes.

With Labour facing savage retribution in the General Election as working class people pay it back for its betrayals, Jack O’Connor is desperately looking for some other political forces to hang onto in the next government. Hence the ‘courtship ritual’ that has emerged into public view involving Siptu and Sinn Fein.

Sinn Fein is also very anxious to do business with Siptu and Jack O’Connor. On February 8, Gerry Adams, made a speech to his party members in Mullingar, in which he warmly welcomed a call by Jack O’Connor to ‘Social Democrats, Left Republicans and Independent Socialists . . . to set aside sectarian divisions and develop a political project aimed at winning the next general election on a common platform, let’s call it Charter 2016’.

Adams called on trade union leaders like O’Connor to look to Sinn Fein referring to ‘the unrequited support given to the Labour Party by some in the leadership of the trade union movement. This misplaced loyalty . . .now risks the very credibility of well meaning individuals.’ Behind the scenes Sinn Fein talked up the significance of this speech resulting in a front page article in The Sunday Times before it was delivered.

At a fringe meeting during the Labour Party Conference in Killarney on the last weekend of February, Jack O’ Connor heaped praise on Sinn Féin’s housing strategy and demanded that the Labour Party be prepared to join a ‘centre Left government’, which would involve Sinn Fein.

What we have here is cynical positioning in the lead in to the general election, now at most a year away but already very much in the minds of the protagonists who will be fighting for power. Sinn Fein is desperately anxious to increase its credibility and ‘respectability’ and thereby extend its vote catchment possibilities by achieving endorsements from trade union leaders. Those leaders are preparing to embrace Sinn Fein as Labour sinks.

What is completely absent is any honest critique of the disastrous role of the trade union leaders in supporting Labour in government or of the horrific programme of austerity that Sinn Fein has just signed up to in the North under the guise of the Stormont House Agreement. Twenty thousand public sector jobs are to be axed while corporation tax on big business is to be reduced. This has caused huge anger in the North with strikes and demonstrations on 13 March.

Sinn Féin is not a party of the Left

A new government that would not be prepared to challenge and defy the diktats of the financial markets and the capitalist establishment and take strong measures to take democratic public ownership of the banks and other key economic resources, will not be able to resolve the debt crisis and the major problems in the current situation.

Sinn Fein will not play this role. It is not a Left party but a nationalist party that makes ‘necessary’ compromises with the capitalist establishment as seen in the North. Neither are the main union leaders prepared to support a radical alternative. Sinn Fein in government and these leaders will simply lean on each other for cover as opposition among working class people inevitably emerges at their failure resolve the pressing problems of society. That is why a new, principled movement against austerity and capitalism needs to be built.