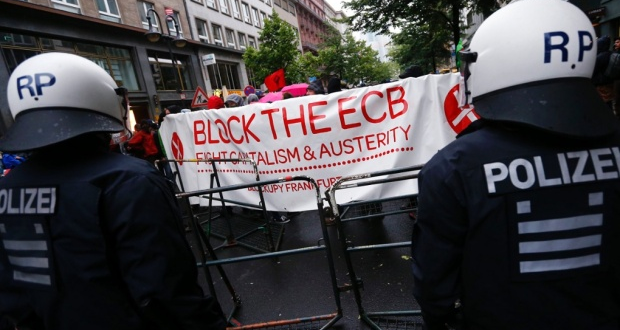 European Union: A Europe for the markets and corporations

The thin cloak of democracy that EU leaders like to cover themselves in was graphically pulled away in the aftermath of the recent Greek elections. The President of the European Commission, Jean Claude Juncker commented that “there can be no democratic choice against the European treaties”, while the German Finance Minister Wolfgang Schaeuble stated that “Elections change nothing. There are rules”

Threats and blackmail after Greek election

The recent Greek election was a clear rejection of austerity policies and an expression of the desire of working people in Greece for an alternative to the economic destruction that is taking place in the country. This election was warmly welcomed by working class people all across Europe.

Rather than recognise this and put an end to austerity policies, EU leaders responded with threats and blackmail. This included the ECB threatening to cut off funds to Greek banks; a move which would have triggered a massive crisis.

This contempt for democracy by the EU is not a new development. Due to the massive opposition to austerity policies, the capitalist classes around Europe have had to attack democratic rights in order to impose their will. The right to strike and the right to protest have been severely curtailed in many countries.

In the course of the crisis we have seen silent coups in Greece and Italy with the replacement of elected governments with ‘technocrats’. In the case of Italy a former a Goldman Sachs advisor, Mario Monti, was parachuted in as Prime Minister. The unelected troika have dictated brutal cuts, privatisations and reforms that have plunged millions into poverty.

From its birth the euro has tied governments into a neo-liberal straight jacket. Spending levels of national governments have been curtailed. These rules have become stricter over the years. In 2011 the so-called “6 pack” shifted is important powers away from elected governments and toward the unelected Commission. The Austerity Treaty a year later went even further in curtailing democratically elected governments from deciding on its own budgetary policy. The Treaty forces governments to balance its budgets and therefore ties future governments into neo-liberal and austerity policies by limiting its ability to increase spending even on measures to stimulate the economy and create jobs.

Governments that stray outside the rules can see their votes removed in the Council and if that is not enough to tame an anti austerity government, EU funding for infrastructural and social projects can be blocked.

How big business runs the EU

These policies are not just a result of a mistaken policy or down to a few ‘bad apples’ at the top. The EU at its core is a pro-big business institution that pushes policies that are in the interests of the capitalist classes around Europe. Austerity is pushed as it acts to shift wealth away from working class people and towards big business through cuts in social spending and downward pressure on labour costs.

Big business dominates EU decision making. The Commission, which is the pivotal institution in the EU, is unelected. Commissioners and senior Commission officials have very close links with big business; many having worked for, or with close ties to, big corporations. Brussels is also packed with corporate lobbyists. There are estimated to be between 15,000-30,000 lobbyists dedicated to influencing decision making. Lobbyists also have very deep pockets, for example, one single piece of legislation which would have seen clearer labelling of food triggered a €1 billion campaign by food industry lobbyists to have it blocked in the European Parliament.

We need to get organised to defend democratic rights. To do this we need to also challenge the dominance of big business. Instead of this authoritarian neo-liberal EU which pushes austerity, we need to see a truly democratic and socialist Europe based on genuine international solidarity between working people that puts the interests of the millions ahead of the millionaires. 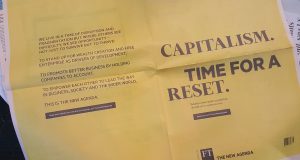