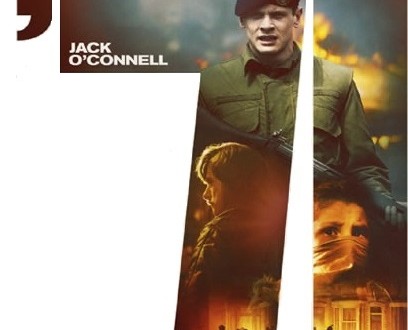 The fim “71” tells the story of a young British Army private (Gary Hook) on his first patrol in Belfast in the year 1971. Hook and his unit are tasked with backing up the RUC as they carry out a house search. Local people intervene and Hook is separated from the rest of his unit during a riot. He is beaten, witnesses a second soldier being shot inches away from him, and barely escapes into the back streets. In the hours that follow horror follows horror in a fast-moving evocation of events in the early months of The Troubles. One particular twist in the film immediately brings to mind the real life incident when widowed mother of ten Jean McConville was accused of helping a wounded soldier on her doorstep as a justification for her kidnap and murder by the IRA.

“71” is also reminiscent of previous films in which the violence of Belfast was to the fore, including 1947’s “Odd Man Out”, in which James Mason played an IRA gunman wounded and on the run, and the chilling representation of tit-for-tat sectarian killings in Alan Clarke’s “Elephant” (1989).

The alienation, bitterness, fear and claustrophobia of 1971 are captured convincingly in this film which is well worth seeing, though it is not for the faint-hearted-the image of a young boy torn apart by a bomb will linger long in the mind of many viewers. The politics and context of the period are not as accurately portrayed, though the director would probably argue that it was not his intention to paint a full picture. Rather he seeks to portray the essential mindlessness of it all-a “war” that ultimately had no winners, only losers.

Of course it is simplistic to portray the violence as “mindless”. Catholic workers and youth were rebelling against a regime that had held them down for fifty years. The tragedy is that they were taken down the cul-de-sac of individual terrorism, which had no prospect of success and only served to further divide the working class.

The greatest problem with the film is the portrayal of the ordinary squaddie as somehow neutral, in contrast to the partisan RUC and the manipulative and murderous special army unit, the Military Reaction Force. In reality the regular regiments of the British Army were at the forefront of the fierce repression dealt out to the Catholic working class. The result was a rising tempo of violence as the year progressed. It is the case of course that the foot soldiers of the British Army were economic conscripts, thrown into a situation they did not understand. The officer class, representatives of the ruling elite which bears ultimate responsibility for the mayhem working people faced, does not deserve the sympathetic portrays given to the naïve but well-meaning officer in “71”.

It is worth remembering that “71” paints a one-sided picture. In the same months as the events in the film were reeling out the working-class were taking part in the largest industrial movement since the general strike of 1926. To give just two examples, a strike by postal workers in January 1971 saw only 8 of 2000 postmen turn up for work, and, between 30,000 and 40,000 workers in the North took part in two one day strikes in protest at the Industrial Relations Bill. The strikes demonstrated the power of the working-class but the problem was that its leadership was weak and lacked any semblance of class understanding. This remains the case today. If we do not wish to see the turmoil of 1971 on our streets again, as we surely don’t, we must strive to build organisations of the working class with the necessary resolute, far-sighted and socialist leadership to change history.