TWO WEEKS into the battle and the occupation is more solid than ever. The determined stand taken by the workers has inspired support right across the city. People have come to the gates bringing food, donations – or just to show their support. And, in turn, the massive public support has boosted the morale and reinforced the resolve of the workers.

Occupations at Basildon and Enfield were ended by court action. But the workers there are maintaining a round the clock picket of their factories, making sure that the machinery stays where it is.

This resistance has already had an impact. Had the workers tamely allowed themselves to be escorted out of the factory by the administrators that would have been the end of the story. People who had worked for Ford for thirty years and more – many since they were apprentices – would have been left with only statutory redundancy pay and reduced pension rights. 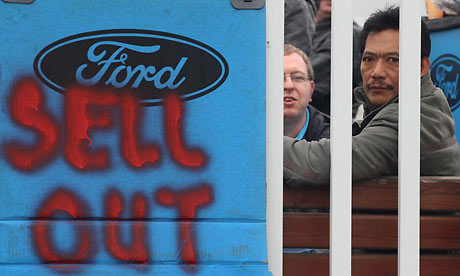 Now, because of the action that has been taken, Ford/Visteon has at least been forced to agree to talks. As we go to press it is not clear what will come out of these negotiations. However, it seems less likely that this first round of talks will produce settlement terms acceptable to the workers. The battle for justice could be set to go on for some time yet.

While the press have chosen to present this as a fight for better redundancy payments – for those maintaining the occupation it is, first and foremost, a struggle to keep the plant open and to retain the jobs. When the occupation began, there was outrage that Ford had reneged on its guarantee that Visteon workers would enjoy Ford terms and conditions, including redundancy and pension arrangements, for life.

The case that has been made by the workers on this is unanswerable. When Visteon was spun off from Ford in 2000 – as a means of dividing one group of Ford workers from another and in preparation for the present situation – they gave written guarantees that Ford wages and conditions would be maintained.

The workers are determined that Ford will not be allowed to walk away from these commitments. But, as the occupation has gone on and as it has become clearer what is at stake, they are less and less inclined to settle for better redundancy terms. Their central demand is for the factory to be reopened.

The anger directed at Ford is not just over the fact that they ripped up written promises on redundancies; it is because they deliberately ran down an efficient and viable factory. In real terms Visteon is not and never has been an independent company. It is part of Ford’s internal market and was “spun off” from the parent company in order to create competition among suppliers and, in this way, drive down wages and conditions.

Nor is the closure decision an “unavoidable” consequence of the global economic downturn. Ford has been trying to close the Belfast plant for years – perhaps since as far back as 2000. They are now using the global contraction and the crisis in the car industry as a cover to implement a decision that was made earlier.

Ford have been able to make the Belfast plant – and other Visteon plants – appear unviable by setting the price paid for the parts they produce impossibly low. All that this creative accounting really means is that the wealth produced in Belfast shows up as a profit somewhere else within the Ford empire.

It now appears that Ford is prepared to pay its South African supplier more than it paid the Belfast factory to produce the same components. Reports from the Ford factories in Britain indicate that there have been serious problems with the quality of the parts brought in from South Africa and fixing these will cost Ford more again.

So the mood in Belfast is that the factory must reopen. As one worker put it during one of the occupation meetings, “The way they can implement their ‘flowback’ agreement allowing Visteon workers jobs in Ford is by putting the Ford sign back up on the building.”

The key to winning this battle is to have Ford workers in Dagenham and Bridgend black the parts that are being brought in to replace production from Belfast, Basildon and Enfield. Unite national officials need to take the lead on this, not leaving it up to the workers in these factories, but issuing a clear instruction to them to take action and also giving a guarantee that the victimisation of any Ford worker will be answered with official industrial action.

If the national officials do not do this, ways will need to be found to allow the shop stewards from the three plants to make a direct appeal to the workers in Bridgend and Dagenham. The message that needs to be got across to other Ford workers is straightforward – allow Ford to get away with this closure of factories on the cheap and you could well be next.

With an almost daily catalogue of job losses being announced across Northern Ireland, there is overwhelming support for the stand being made at by the Visteon/Ford workers. Feeling this pressure, politicians from all the major local parties have had little alternative but to voice their support.

The message now needs to go out to these politicians that, whatever happens with Ford, the factory must be kept open. Northern Ireland cannot afford to lose this plant. The skills that have been built up over decades must be retained.

If Ford cannot be forced to reopen the factory, the pressure must go on the Assembly to take it over. Rather than pay workers to languish on the dole, it should be taken into public ownership. And, if Ford do not provide a market for the current products, investment should be put into research and development, into retraining and retooling so that the skills and equipment can be utilised to make alternative products.

To achieve this would require the local politicians to do an about face on their economic policies which, up to now, have been all about privatising and cutting public services. It would take the pressure of an ongoing occupation that can mobilise mass support in other workplaces and across all communities to force their hand on this. Whatever the final outcome, the courageous stand taken by the Visteon/Ford workers has shown that it is possible to fight to defend jobs.